Handheld devices and the benefits to children with autism

I mentioned on Twitter the other day that my son wants a Nintendo 3DS for Christmas and a few parents got into a discussion about how great the handheld devices were for children with Autism. Also, when I wrote about taking children with Autism out to restaurants, a lot of parents were quick to point out that they often brought along devices as well to help.

So what is it about handheld devices that are so great for children with Autism? What are the downsides?

It’s all about control 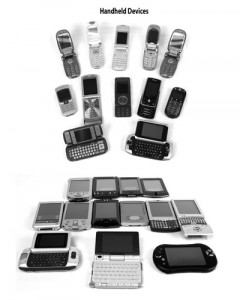 Having something right in your hand gives you complete control over it. That means that if you pause a movie, take a wrong turn in a game, flip pages in a book too fast… no one will be upset, no one will say anything… it’s only for you and you are in control of it.

Doing what you love

My son loves to read books and play video games, which means that I can put a book in his hand or a handheld video game system and he’ll keep himself amused for hours. It’s what he loves and it’s right there in his hand.

When we parents think about bringing something to the restaurant to amuse our children, we don’t grab things they hate.. we get what they love.

Sometimes that takes trial and error but most likely you’ll find something pretty quick, especially since they get to control it.

Blocking out the world

The best thing about having something in your hand, engaging your senses is that it allows you to block out other input around you, such as sights and sounds.

If you have Autism, this could be huge. No more restaurant noises bothering you… however, if you’re a parent trying to get your autistic child’s attention while they’re playing a handheld game.. you may find yourself getting frustrated pretty quick.

Putting the three together… you have something you love, complete control over it and you can immerse yourself into that handheld world, blocking out the rest.

These are very important to children in general, more so to those that have Autism. People with Autism focus intently on the things they love, to the point where they need to block out the rest of the world.

Everything your child absorbs when they can control it, love it and focus solely on it is learned on a scale far greater than any other method.

And it doesn’t have to be an educational program or math book to do it either. There are life lessons in movies, there are problem solving and motor skill building qualities to video games. Your child will gain a lot of valuable knowledge and skill simply by being so engaged by that device in their hands.

There are no distractions, they love it and get to enjoy it even more when they have full control over it. What they learn… they learn. It doesn’t just go in one ear and out the other.

If you do get them reading a book, or doing an educational program on the ipad or something along those lines… all the better!

The one big downside

There is one major problem that most everyone will run into, Autism or not… but a child with Autism will find it even more difficult… that is when it comes time to turn it off.

The more a person loves something, is in control of it and is completely immersed in it as if it’s your whole world… the harder it is to have it ripped away.

I don’t know anyone that had an easy time getting a game, or book, or movie, or ipad, etc away from their child when they’re fully immersed in it. It’s going to be a battle…. at first.

But you can look at it more as a way to practice for the real world because let’s face it… if they don’t learn how to let go now… there will come a time when they’ll have to do it at school, work or just generally in public and if they haven’t had that practice, it could be a huge problem.

It used to be the #1 cause of meltdowns for my son.. he’d do great all day, get a game for a reward and then blow up when it came time to turn it off. But as I said, it “used to be”. He’s so much better now because he’s learned, over time, that it’s ok to put it down. It’s ok to put it off for another time because soon enough, if he behaves, there will be another time.

We just had to endure the meltdowns for a while to get to this point.

Handheld devices such as books?

You may have noticed I referenced books in with the other electronics in my examples… for Cameron, he loves books. A lot of the time, we can get a book from the library or from a friend and he’s more than happy to sit down with that for an hour.

He can’t read much of it (only really small words) but that doesn’t stop him from enjoying it.

You don’t have to force feed your child movies or video games… anything they love will do. Sensory objects, art work, books, money… yeah, my son also loves to sort out coins and such.

That being said, there’s nothing wrong with movies, games or ipads… they’re all helping your child to learn too. You may wish to limit those things a bit more but still, there’s no harm in giving your child a good game or movie.

The escape, the interactions…. all of it is not only good, it’s important. Your child may have a meltdown when it’s time to turn it off but it’s still valuable coping skills they’re learning.

Don’t feel like you’re doing anything wrong by letting your child stare at something in their hands for an hour or two… it’s good for them. It’s a valuable growing tool.

← Guilt, grieving and other emotions when your child has Autism
Who has a right to talk about Autism? →