Cameron has started this year in a new, more academic class than last year. Up until now, he’s been learning a lot but the primary focus as been on building upon the things that he’s been struggling with. Things like his fine motor skills and socializing.

This year, he’s doing math and spelling tests. He’s also learning about mammals, reptiles and amphibians. It’s exciting stuff! And he’s loving every minute of it!

My wife, Natalie, brought up an interesting point though, one that we’ve now mentioned to the school.

Cameron has a terrible time with his writing. He doesn’t like writing and he knows he’s not good at it. And it weighs on his mind. 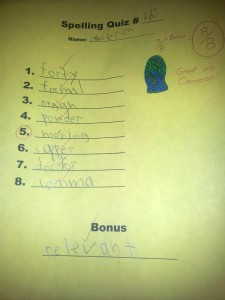 Missed the “r” in morning

Looking back at some of his spelling tests, the words that he got wrong or the mistakes he made were words and mistakes that he shouldn’t have gotten wrong.

For example, in almost all of his spelling mistakes, it’s due to him missing a letter. Not getting a letter wrong or mixing them up, he is leaving out entire letters.

Natalie is the one that realized that, he’s not getting the words wrong because he doesn’t know how to spell them (or sound them out), it’s because his mind isn’t on the word… it’s on his writing.

He knows that his writing doesn’t look good and he knows that he has to fit the answers in a little space on the page. So he puts in extra effort to be sure that the teacher can read it and that it looks ok… because, you know… you don’t want anyone to laugh at your writing. Yes, he worries about that.

So I brought it up with the principle yesterday and if all goes well, hopefully testing can be done, or at least made available, electronically. So that if a student prefers, they can type their answers, either at a computer or some device with a touch screen.

And we’re lucky. We’re so very lucky that this school is so understanding. As I brought it up, I could see the principle understanding exactly what I meant. When I said “when a child with autism starts to get flustered… ” he finished my sentence with “their whole day could be shot after that.”

Do I want them to stop working on his writing and fine motor skills? No, of course not!!

But I don’t want those challenges to get in the way of other things either. He knows those words. He knows the answers to the tests. And his anxiety over his writing skills should not be getting in the way of that.

The reason that I’m writing about this, is not just to illustrate what’s happening in Cameron’s life at the moment (although there is that too), it’s to provide an example where sometimes you have to be involved, be aware and when possible, find another way.

Parents, you need to recognize these things in your children. Perhaps they are being held back by something that no one else would ever be able to recognize. Perhaps there is some other way that may work well for your child. And most importantly, you have to try to provide some solutions.

Granted, as I said, we’re lucky. My son’s school is awesome. And not everyone has a school like his. Not all schools can or are able to accommodate a change like that.

But that doesn’t mean that you shouldn’t try.

If something isn’t working, or could be working better, you have to try to find another way.

Nothing can stop you, so long as you never stop trying to find another way.

Everyone has their own heart song 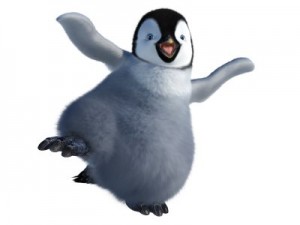 In 2006, a cute little movie came out that spawned a lot of fascination towards penguins. Granted, not many other movies or documentaries featured them singing and/or dancing. Still, Happy Feet went on to have enough success as to earn a sequel.

Since we haven’t watched it in my house in a while, I thought I’d put it on again for my boys, who are now 7 (Cameron) and just about to turn 5 (Tyler).

Right at the beginning of the movie, when little Mumble (the star of the show) is born, he starts to dance. He says he doesn’t know what he’s doing, he just can’t stop. His feet are happy.

This amuses my boys to no end and they get up and start dancing… er… well, what they call dancing. I’m sure my neighbor downstairs didn’t think it was dancing.

The movie very quickly went from happy to sad though, as all the other children began to sing, quite beautifully, while poor Mumble sounded terrible.

As Mumble failed and failed again to sing, his parents had this conversation:

Are you starting to see why this movie is the subject of a blog post on an autism blog?

So while I sat there, watching this movie and thinking how familiar it all sounds and feels, it hit full force as the very last lines were narrated to close out the scene of Mumble’s childhood:

Pay no mind to his dancing heart. The kid saw out his school days at the back of the class, lost in his imaginings.
What fabulous worlds lay out there, far beyond the ice?
Was there any place where one small penguin without a heart song could ever truly belong?

It was at this point when Cameron looked at me, quite seriously, and said “He’s sad because he doesn’t have a heart song, right?”

What do you say to a child when you know that he’s asking because he feels like he is that penguin? Does he feel like that penguin? Has he drawn the same similarities I have? Is he really even following along that closely? Maybe he’s just curious like any other child would be? Am I the one that is putting too much of our life into what I’m seeing in this movie?

This is what I told him:

Cameron, he does have a heart song. Everyone has a heart song. A heart song is something in your heart that only you can hear. Those penguins, when they hear it, they’re able to get it out and express it through singing. That’s how they share their heart song with the world.

But little Mumble, he’s not able to sing. For what ever reason, he just can’t. And so his heart song comes out another way, through his feet. He dances. And he dances better than anyone else.

When you hear the music in the movie, but don’t see anyone around playing the music on guitars or drums, what you’re actually hearing is the heart song in that penguin’s heart. So when he’s dancing, he’s dancing to his heart song.

At this point, Cameron asked about us. “Do people have heart songs?”

Yes, sort of. But it’s not always music. Some people are really good at drawing, cooking, running really fast, playing video games… we all have something that we love to do and we are very good at it.

We all have one. No matter how different we may think we are or how much anyone else thinks we are, we each have a heart song. And it doesn’t matter if it comes out through our feet and people think it’s weird, so long as it comes out.

Because our heart song is important.

Sure enough, later in the movie, as Mumble ventured out and eventually found the aliens (humans), he failed at being able to communicate with them… that is, until he danced.

So I told Cameron “look, he can communicate with them now.”

Cameron looked at me and asked “What does “communicate” mean?”

Again, I explained to him:

Well, communicating is the way in which we tell each other something. Like, me talking to you. But it’s not always talking. Like, when you see a smile, you know someone’s happy. Or you see someone crying, you know they’re sad. They are “communicating” that to you.

In this case, Mumble was talking but those people don’t understand Penguin talk, so they weren’t communicating very well. They didn’t understand each other. But once Mumble started to dance, and the people all gathered round, they were communicating.

At which point Cameron asked: “So his heart song is how he communicates?”

And sure enough, as the movie played on and the humans followed him back to the penguin home land and they all started to dance, he started to see how that one little dancing penguin wasn’t so “different” after all. That what made him different made him very special.

If it wasn’t for his dancing, he never would have found the humans, or communicated with them, and they would have ran out of food.

So no matter how different or weird or “not penguin” it is to find your heart song and to let it out, you have to do it anyway.

We all have one. And it’s special.

It needs to be shared with the world.