Resenting or even hating a family member with Autism

My wife just started a new part time job selling children’s clothing at a local store, it’s a perfect job for her since she loves children and she loves dressing them up just as much. It’s been a couple of weeks and so her co-workers have adjusted to her being there and as such, found herself in quite the interesting conversation with one of them. 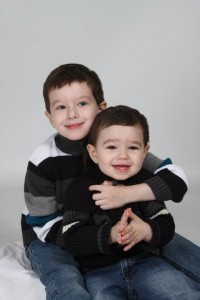 The topic came up about our children, how Cameron has Autism and Tyler does not. At this point her co-worker shared that her brother has Autism and more so than that, she actually resents him… to the point of hating him.

Now, before I tell you what my wife’s response was to this, I’d first like to speculate just how much this might be the truth for other people out there… perhaps even more people than we might be aware of because it’s very likely that most would never confess such a thing, certainly not to anyone that would ever deliver that news back to the family.

It got me to thinking about it and even though I don’t understand, I sort of do understand too.

First of all, a sibling with Autism is likely to not play well with you, perhaps not even involve you at all and would have great difficulty sharing. Meanwhile your parents would likely ride you to no end to be extra nice to them because “it’s not their fault.”

You’d likely have to have them tag along with you or have them at your gatherings and so forth because it’s likely that your sibling wouldn’t have many friends if they have Autism. It’s possible, depending on severity, that they never really even had a normal birthday party and as such, your parents would impose all these extra demands and responsibilities on you, on your special day, to help your sibling feel involved.

I think you see where I’m going, the list can go on and on… even a high functioning sibling with Aspergers could become a burden on your life that you might grow to resent.

I would hope that most rational people would grow out of that resentment and finally understand what it was their parents were trying to do, but there’s no real guarantee of that happening, especially if the parents don’t recognize that and help it along some.

If the sibling is quite low functioning and needing a lot of help, to the point of (in your mind) stealing all of your parent’s time away from you… well, it’s easy to see where the resentment could grow from there.

Actually, the more I think about it, the more I can see how my wife’s co-worker could feel that way… how I kind of feel bad for her that she had to feel that for so long. Not because she is a bad person for feeling it, but because she never had the guidance she needed to help her understand how much good she was doing in all the things she was likely asked to do, or sacrifice. That she was a needed part of her sibling’s upbringing and life to this day.

I certainly can’t say that she’s justified in feeling that way, no one should resent or hate anyone for having Autism. They didn’t choose to have Autism. But when I put some thought into it, I can sort of understand how it may have come to be.

I think it’s just important that we remember that it’s a distinct possibility in our own children. To always remember that siblings can resent each other no matter the situation but it’s so very easy to happen when one child is “different.” My little one, Tyler, is a very very kind soul and something tells me I will have nothing to worry about, but I can’t ever let it slip though. If we are not careful, if we miss something, he could hold a resentment just as my wife’s co-worker does. And I would hate for that to happen.

So what did my wife say to her in response to that? I’m paraphrasing a bit here but basically she told her co-worker, and all her co-workers:

“Honestly, if any of you deliberately ignore someone who comes in and has a disability of any kind, not only will I call you out on it and set you straight, I will never, ever talk to you again. It’s just something I will not tolerate.”

Not only am I proud of her, but so were her managers. They agreed, everyone that walks in gets treated the same, disorder, disability or nothing.