This one is for the dads 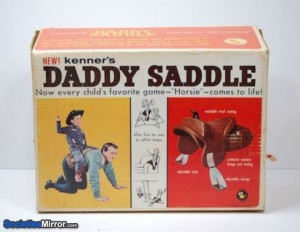 Here’s to the dads that don’t mind changing diapers, doing the feedings, getting up at night, running the errands, cleaning up the messes and all the other baby things.

Here’s to the dads that have no problem pitching in with dishes, laundry or other chores around the house.

Here’s to the dads that don’t make their wives attend all of their children’s appointments/meetings/events/etc on her own. No matter what their schedule, they make the time.

Here’s to the dads that get up early with their children, miss out on week-ends with friends, don’t get to travel like they used to and may not get out to the sporting events that they once did… and though they miss some of the freedoms of the past, they wouldn’t trade it for anything.

Here’s to the dads that see mostly moms doing the talking online and at conventions and decide to get involved too.

Here’s to the dads that are stay at home parents while their wives work. Despite what society may or may not think, they deserve every bit as much recognition as stay at home mother’s do.

Here’s to the dads that understand that having a special needs child may mean giving up on the dreams that they had for their child but that their child’s future is going to be wonderful and amazing anyhow and will encourage, nurture and support them every step of the way.

Here’s to the dads that are single parents, despite the fact that history and tradition have not prepared them at all and tells them that they can’t do it.

Here’s to the dads that will play with dolls, roll in the dirt, talk on toy phones and do anything else their child needs them to do… even in public.

Here’s to the dads that can work 3 jobs at a time when they have to, to provide for their family, and still manage to find time for family too.

Here’s to the dads who stuck around when all they could think about was leaving.

Becoming a father and being a dad are two different things.

Here’s to you… the friend, role model, strongest person in the world, the vanquisher of monsters, the guy who slips their kid a dollar or a treat even when mom says no… you’re the man of the house and with that you deserve more than just a day.

“Autism is like a rainbow; it has a brighter side & a darker side, every shade is important & beautiful and it hides something golden.”
by Stuart Duncan