The winner for the Determination award goes to… 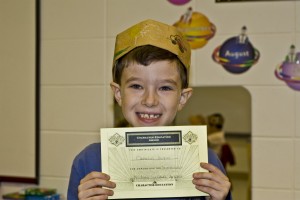 Every month, as part of an effort to raise (or keep up) school spirits, the teachers pick a student from each class/grade who demonstrates the most of that month’s selected character trait to win an award.

And Cameron deserves this one.

From early on, knowing full well that Cameron’s struggles will likely be much greater than the average person’s, I wanted to instill in him some confidence that would still be there later in life because it’s always been a part of him.

So right from the time when he was capable of answering, I’d ask him “Cameron, what do you do when you fall down?” and he’d answer “You get back up.”

That was when he was 3. That’s still his answer today. He’s almost 7.

The reason that I picked this one thing, this one characteristic for him to hold above all else is that, through determination, he can over come any odds to achieve any other characteristic he may need.

Determination is the key to not just overcoming his own weaknesses and struggles but it’s also the key to achieving more than those around him.

He’ll be in a world with people that do not have autism nor any other disability and while they may accept him and may work with him… it’s his determination that will allow him to progress beyond that… beyond them… to strive harder than they ever will and to surpass them.

It doesn’t matter what he decides to do with his life… so long as he believes in himself and stays determined… he can do anything.