If you believe in yourself, the magic will happen

In 2007, a wonderfully fun little movie called Mr. Magorium’s Wonder Emporium came out featuring Dustin Hoffman, Natalie Portman and Justin Bateman. While this movie will never hold a candle to films such as the Wizard of Oz or Willy Wonka and the Chocolate Factory, it does shine in it’s own special way. 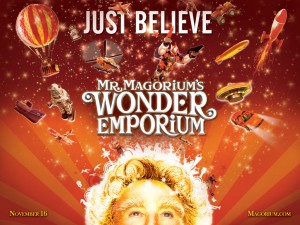 Dustin Hoffman plays the magical being, Mr. Magorium… and by magical, I mean that he’s 243 years old and brings toys to life. His assistant is played by Natalie Portman who is struggling to find herself. She tells Mr. Magorium that she “feels stuck” and he responds by giving her the Congreve Cube… uh… a block of wood.

As you get accustomed to the magical world within the store, Mr. Magorium throws in a shocker in announcing that he has to leave… effectively, he’s going to die tomorrow.

This leaves her with a store that she’s not sure she wants, an accountant that hasn’t even seen a toy in years and a fun little boy sidekick type that is in the peak of his magic believing life.

It’s a wonderfully fun movie for the kids… Cameron was mesmerized through most of it but did get bored a few times as the discussions about life would take away from the store and the magic.

But that was the thing, I think, in that this movie held so much more magic for the parents than it did for the children. I think that is what holds it back from being a classic like Oz or Willy Wonka but it’s also what makes it so important for parents to watch.

You see, as Mr. Magorium “leaves” and his assistant has to figure out her life, the store begins to lose it’s colour, the toys stop coming to life… essentially, it dies. It becomes a dark, dreary place that no one wants to step foot into.

As Molly dances around the store and the toys begin to move, dance and fly, the colours come back, the music builds and builds and the children come running in the front door to see all of the magic, my son sat on the couch, hugging the couch cushion with a huge smile on his face.

I love to see him being so happy that he can hardly contain it. It’s a rarity.

So I decided to see if Cameron got it:

Me: So what did she have to do to make the magic come back?

Me: Right! …  And what did she have to believe in?

Me: Nope… herself! She had to believe in herself!

Cameron: believe in herself?

Cameron: and that makes the magic?

Me: Exactly. If you believe in yourself, the magic will happen.

Autism or not, if you believe in yourself, the magic will happen.

← Birthday parties, autistics, parents and choices
Do what you need to do, I won’t sue →