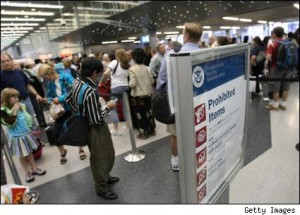 I’m not really a fan of using sensationalist headlines to grab a reader but in this case, I think it’s warranted because the sad fact of the matter is.. it’s true.

A news article was brought to my attention called “Passengers Face Israeli-Style Behavior Screening at Boston’s Logan Airport” which didn’t mention Autism at all yet has a very real and very large impact on autistics.

The sentence of particular interest is:

Those who exhibit suspicious behavior like avoiding eye contact and struggling with answers will be pulled aside for more screening.

Does that sound familiar to you?

From the perspective of the TSA

I haven’t taken the training myself but it’s not a stretch to imagine these behaviors as indicators of deceit:

There’s more but you get the idea. The TSA would witness this from a person and have reason to suspect something…. prompting them to take the person in for further questioning.

Small rooms, very intense atmosphere, very imposing people… if you’ve ever been pulled in for more questions, you know that it’s maddening for the most confident of people.

From the other perspective

You and I recognize that list of “behaviors” as symptoms or signs of Autism. You and I also know that taking that person into a small room for further questioning will not go well.

How often have we read about police having issues with autistics where they simply did not know what to expect? The police, thinking they’re protecting themselves, react to actions they don’t understand from the person with Autism.

This can range from those considered “low functioning” (dependent) autistics to even those that live an independent life but simply aren’t ready to cope with such strenuous situations.

By the way, I’m talking about adults here. It’s not just children with Autism but teens and adults as well. Many people believe, and some studies have backed it up, that Autism is just as prevalent in adults (1 in 100’ish) as it is in children.

So if 1 out of every 100 people that walk through customs at the airport has Autism and a good percentage of those people have symptoms that could resemble “suspicious behaviors” according to the TSA’s training… this could get messy.

We can only hope

Let’s pray that someone there has a bit of foresight to recognize that some people with disabilities need to be addressed. They need to be aware that not everyone that refuses to look you in the eye has something to hide.

They need to understand that someone with Autism, having to get there an hour or two ahead of time and wait, with all that sensory overload all around them, having to be in line for what could be hours just to get to the security…. put it this way, the airport experience can elevate an autistics symptoms long before they ever get to the security personnel.

That will only make things worse.

A trip through customs, the way the TSA handle things, could leave a very negative, life long impression that can never be undone.

Is there a way to avoid this?

Well, if you have Autism or are with someone that has Autism, you could tell them right away so that they know.

However, this isn’t a guarantee. I mean, let’s face it… what’s to stop a terrorist from realizing the correlation between terrorist behaviors and Autism symptoms (maybe they read this post!!) and then use that as an excuse themselves.

It certainly wouldn’t be the first time someone faked having Autism.

So yes, do your best to make them aware and avoid the headaches in advance but don’t be too surprised if all of your attempts fall on deaf ears sometimes.

Only their awareness and ability to differentiate can avoid unnecessary altercations with special needs people. And ultimately, I’d think that they want that to avoid negative media attention.

Let’s hope that they can recognize the difference between an autistic and a terrorist.

I can’t believe I just said that.

← Should you tell a stranger if you suspect their child may have autism?
The TSA responds to Autism concerns over new “behavior screening” being used at airports →