Dr. Paul Offit did an interview with the fine folks over at the Thinking Person’s Guide to Autism this week-end. In preparation, they asked people on Twitter if they had any questions they’d like answered. I have lots, but one in particular that weighed on my mind, so I asked it… as did they… and he answered!

Earlier this month, I wrote a post making official my stance on the whole vaccine – autism thing going on that you may have heard of… in it, I made a very bold statement. In fact, I wrote it in bold.

The way I see it, if they can pump out a newer and better cell phone every 3 months, they can have new and better vaccines as well. 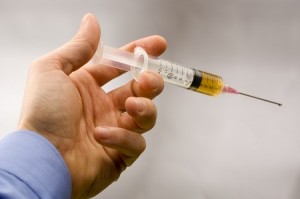 I often read sites that list out the ingredients in vaccines, most don’t know what those ingredients really are… they just know that they sound like something else bad that they’ve heard of before and so… they must be bad too.

The one thing that struck me, however, was that the ingredients don’t seem to change from site to site… from writing to writing. Which got me to wondering whether or not they ever do change.

We all know that thimerosal was removed from most of the vaccines in 1991 (UK) and 1998 (US) but other than that, what else has been done?

If you’ve already clicked through to their site, as I’ve linked it above, you’ve probably already read it but for those that haven’t, here is my question along with his answer:

Are vaccines constantly upgraded and monitored for safety and efficacy?

Yes, like no other medical product, including all the drugs you put into your body and certainly more than anything you’d get at the General Nutrition Center. We have a very well-tested, well-worn vaccine schedule.

It’s not a huge answer nor is it very detailed… but I think it answers my question nicely and, with any luck, put some people’s concerns to rest.

Because let’s be honest, if it was still the same ole same ole from 60 years ago, we’d all be even more scared than we already are.

Plus, he has a point. A drug that is released these days is released as is… with a laundry list of side effects. And so long as it’s up to code, even with those side effects, it never changes. It just continues to be used as it is. Perhaps an extra strength or new type will be released but that’s it.

Quite frankly, that scares me… their continual work on the vaccines is a comforting thought. So for what it’s worth to you, now you know, as do I.

Paul A. Offit, M.D., is an American pediatrician specializing in infectious diseases and an expert on vaccines, immunology, and virology. He is the co-inventor of a rotavirus vaccine that has been credited with saving hundreds of lives every day. Offit is the Maurice R. Hilleman Professor of Vaccinology, Professor of Pediatrics at the University of Pennsylvania, Chief of the Division of Infectious Diseases, and the Director of the Vaccine Education Center at The Children’s Hospital of Philadelphia. He has been a member of the Centers for Disease Control (CDC) Advisory Committee on Immunization Practices.

← Life is the key to decyphering Autism
The follow through. When disciplining, stick to your guns →

“Children with Autism grow up. It's time the rest of the world did too, through understanding and acceptance.”
by Stuart Duncan