I'm a Mum of two girls on the Autism Spectrum (6yo & 7yo), I blog at Stuff With Thing about Life, the Universe and Autism.
Author Archive | leechbabe 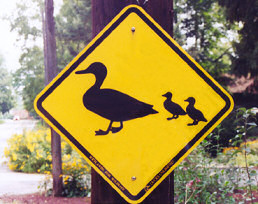 I pick up my younger daughter and her classmate from their school each afternoon.

We drive to oldest daughter’s school in the next suburb and collect her.

Each afternoon follows a set pattern, pick up two, and drive the same roads, park in the same place. Walk to the others classroom, play the same games, bell rings. Leave with three. Get in car in same order, drive same route, and offer the same snacks.

Three children on the autism spectrum, I try to minimize changes in routine, avoid conflict.

Each afternoon the conversation follows the same route. Topics dictated by the landscape we drive through. Street signs, letter boxes and houses the visual route markers to our verbal dialogue.

We drive out of the first school, the two clamouring for snack. As we approach the T intersection the ‘bad thing about today’ is revealed – a child roaring like a dinosaur, the teacher changing the actions to a song.

As we pass the swimming school the two begin to talk about ‘my best day’, seeing a snail in gardening class, playing a with favourite toy.

We walk into the other school, they both bolt for the playground, I follow, we play the same game, the climbing equipment is the boat, and the ground is the sea. I am the shark, squeals of feigned terror as the shark approaches, giggles of delight as they escape the shark.

The bell rings, two sets of hands reach up and cover two sets of ears, two voice exclaim ‘too loud’.

Then the rush of children out the classroom doors, loud joyful noise as they escape the school room again. We wait, oldest daughter is always the last out, organisation is a challenge, easier to wait until her classmates are outside and the room is quiet, and then she can think, remember what needs to be packed to come home.

Finally we are on our way again, three in the car. Slowly we exit the busy car park, all three voices talking about their day, all three demanding that the others be quite and listen.  We turn the corner towards the train tunnel, oldest recounts why she has named it ‘The Echo Tunnel’.

Another corner, as always this corner turns the conversation towards fairies, what attracts fairies, what repels, where to look for them. Every afternoon the conversation follows the same route. Topics dictated by the landscape we drive through. Street signs, letter boxes and houses the visual route markers to our verbal dialogue.

As we approach the duck pond my heart sinks in anticipation, a corner is turned, the yellow sign with Mama Duck and two baby ducks is passed “Excuse me, are we friends?” the question is asked.

Oldest daughter replies “No. You are my sister’s friend.”

Younger sister answers “You mine friend.”

Each day I insert my social story voice into their conversation “It is okay to be friends with more than one person. Your sisters’ friend can be your friend too.”

We drive under another bridge, I’m ignored as always, conversation turns to invitations to come over and play, lets hunt fairies in the garden.  As we pull into classmates drive way I’m besieged by petitions to please can we stay, please can we play.

Weeks turn to months, every afternoon the conversation follows the same route. Topics dictated by the landscape we drive through. Street signs, letter boxes and houses the visual route markers to our verbal dialogue.

Then one day, we approach the duck pond. My heart sinks, the questions is asked “Excuse me, are we friends?”

And there is a pause, I slow down, ears alert at this change.

Youngest daughter answers “You mine friend.”

The two turn to oldest daughter, she has not spoken, she is thinking, I hold myself silent, hoping for change.

“I think we are” she says “You believe fairies and so do I, you have a little sister with autism and so do I… is that enough things to make us friends?”

He listens quietly, seriously and after due thought he responds “I think maybe we need more things.”

We go under the bridge but the conversation does not change. Something new is blooming here on our drive home.

All three are silent, thinking.  “How about ten things, if we have ten things that are the same, would that make us friends?” oldest daughter asks.

“Yes, it would, ten things is good” he answers

And a rising babble of voices explodes as the three work out ten things that are the same.

Every afternoon the conversation still follows the same route. Topics dictated by the landscape we drive through. Street signs, letter boxes and houses the visual route markers to our verbal dialogue.  As we pass the duck pond the same question “Excuse me, are we friends?” But now we have a different answer, a list of ten ways they are the same, ten things to make a friendship.