Disadvantage of Being Obese During Pregnancy

Obesity is a becoming a huge medical problem that is growing in an uncontrollable fashion. Health experts are now aiming to educate more people about the disadvantages of becoming obese. These days, it is easier to experience weight gain than weight loss. According to statistics, more women fall in the category of obesity than men. Scientifically, women have more fats cells compared with men.

During the state of pregnancy, women’s hormones change and along with these changes, some women experience an increase in their appetite for food. This increase in appetite may lead to weight gain and can eventually result in medical problems such as autism in their unborn child.

Disadvantage of Being Obese during Pregnancy

Obesity is measured by the use of the body mass index, which is the division of weight in kilograms over height in centimeters of a person. You can check your body mass index to know if you are obese, average, or too skinny for your height. There are many potential health hazards when a pregnant woman is obese such as heart problems and diabetes as well as bearing a child with autism disorder. Autism is experienced by children at the age of 3 years old. It usually affects the developmental stage, particularly the child’s language skills, social skills and having behavior that is restrictive and repetitive in nature. What happens is that when a pregnant woman is obese, the development of the synapse and nerve cells is altered, resulting in the child developing the medical condition autism. Obesity during pregnancy can put the mother and her baby in danger of health problems that are serious and obesity can also interfere with a woman’s fertility level.

Another disadvantage brought about by obesity during pregnancy is that it can lead to the woman facing social issues. Obese people are looked down on by the rest of society. Aside from that, the pregnant woman may also experience problems related to the body structure and can lead to experiencing difficulty in moving as well as requiring excessive sleep and rest episodes. Lastly, being obese during pregnancy may lead to the woman experiencing personality related problems such as tiredness, sloppy attitude, lack of concentration and abnormal movement of the body. In order to prevent such occurrences, pregnant women should try and avoid obesity.

Despite the fact that it is easier to gain weight than lose it, the best way for pregnant women to deal with obesity is through healthy dieting.  The goal should be to have excellent fitness and nutrition during the pregnancy period by eating the right kinds of food like fruits, vegetables, and other protein rich foods. Vitamins and mineral rich foods can also be added to the diet to keep healthy.

If you are planning to get pregnant, then one of the best things to do is to undergo healthy weight loss prior to becoming pregnant.   You can do TRX training classes or perhaps undergo a 24hour fitness workout program. Even during pregnancy, women can still continue with an exercise program. There are many types of exercises which are suitable for pregnant woman; you can ask your specified health care provider for details. Exercise does not need to be strenuous; instead it can be simple and gentle exercise like walking for about 30 minutes daily. This will also help in the reduction of risk for any potential complication towards one’s health during pregnancy and certainly help to avoid becoming obese.

Apart from fitness workouts, one can try Medifast and BistroMD which provide healthy meal replacements for quick and safe weight loss. Get the Bistro MD deals here and visit http://www.weightlossdiets4women.com/medifast-coupons-and-review-of-meal-replacement-plans/ for the latest Medifast offers.
Comments { 1 }

Obesity During Pregnancy May be Linked to Autism in Children

Are you pregnant? Do you seek information on how to prevent neurological disturbances in your newborn? A recent study has just discovered that pregnant women who are obese may have increased risk for developing a child with autism. 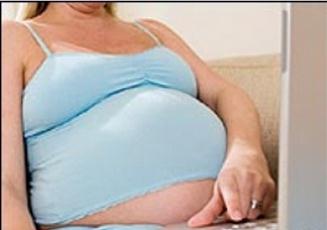 The mothers of the children were asked about their intra-partal health or their health during their pregnancy. The records of the women during pregnancy and delivery were available, and researchers found out that most women who had autistic children are obese during pregnancy. Although the direct connection between obesity and autism is not clear, the authors of the research have offered some theories.

There were no differences in the ethnic, racial, health insurance and education levels of pregnant mothers that may have influenced the results. However, the study did not have information regarding the dietary habits and blood tests of women duringpregnancy that may be other causes for the development of autism; nevertheless, the study suggests that obese women are 67% more likely to develop autistic children that normal weight mothers. Aside from autism, obese pregnant women have twice the risk of developing other developmental delays in their offspring.

Since there is an increased incidence of obesity in adults, the possible increase in children with autism may just be worrisome. In this regard, it is essential for pregnant women to watch out their weight and for non-pregnant women to maintain an ideal body weight to reduce the chances of being obese before and during pregnancy.

It is also essential that pregnant women report any increased weight gaining during pregnancy to their obstetricians in order to minimize, if not avoid complications during pregnancy and delivery.

Are you planning to get pregnant, but you are obese? Then, this now the right time to watch your weight and start having a healthier living.

Dr. Amarendra writes on weight loss and thus he interested to promote Bistro MD promotional code and Diet to Go web codes. BistroMD and Diet-to-Go are the two best weight loss programs that are clinically endorsed by doctors.