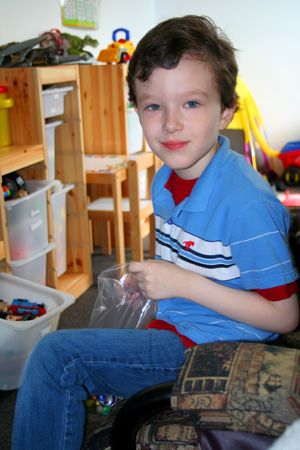 My son Cameron is my oldest child and an older brother to Tyler. He was diagnosed with Autism when he was 2.5 despite us pushing for a diagnosis when he was 2. Cameron has a great sense of humour, an amazing imagination and is extremely intelligent.

Cameron was able to count to 40 before stepping foot into pre-kindergarden class, he was arranging building blocks by colour as soon as he was able to sit up on his own and has given us reason to believe, many times, that he has a photographic memory… recalling events from when he was one, and even reciting stories that were only read to him one time several months prior.

Cameron weighed in at just 7 pounds, 8 ounces when born but sky rocketed towards the skies almost immediately, becoming taller than the average 8 year old by the time he was 4. This often leads to other complications as children and adults alike expect more from him than what they should. It’s very easy to forget that he’s 4 when he’s standing taller than an 8 year old.

More importantly than all of this is that he is persistent and determined… he may not know that he’s different, or that some things may come harder to him but he does know that he can do anything and he will not stop trying until he does. My wife and I work hard every single day trying to help him cope and even beat this incurable disorder but all we can do is help steer him as best we can, he does the hard parts himself and so far, he’s doing amazing. He’s my inspiration and my motivation.

“Children with Autism are not damaged or defective. They are amazing people with unlimited potential. We simply need to help them find the way.”
by Stuart Duncan