Dad, what happens when you die?

My cat, Prince, my friend for 17 years, is dying. He hasn’t eaten in over a month. He’s very skinny, moving slowly. The kind of thing that even my children can’t miss. Which lead to a talk about preparing for Prince, the cat that is the combined age of both of my children put together, to die soon.

Often while putting my boys to bed, they’ll ask me a question. It’s usually a science question. I figure the reasons being that they truly are interested in science combined with the fact that they know I’ll sit and talk about it rather than tell them to just go to sleep.

Tonight, they asked me what happens when a person dies.

I explained to them that some people believe that if we are good enough, we go to heaven after we die and we see friends and family that have died before us. Some other people believe that we simply… stop, like going to sleep and never waking up but never dreaming either, just no longer existing.

Then I said that I believe it’s somewhere in the middle because of what I know about science.

I told them that scientists have looked into our molecules, into our atoms and found the very same elements from the big bang… the very start of our universe. The same things that are found in stars and galaxies billions of years ago, billions of light years away, are found right here, in us. Everything in the universe is connected and can be traced back to the big bang… when time and space, as we know it, began.

Again, pretty heavy stuff for a 10 and 7 year old.

So I said “Do you remember when we talked about the Sun? How it’s a big fiery ball of plasma in space and how it’s putting out a ton of energy all the time? It’s moving, it’s emitting light and it’s emitting heat… all of that is energy that the Sun is sending out into the universe all the time. Remember how I said that energy never dies? There is never more or less energy? It just goes somewhere else or becomes something else?”

I continued “We are basically bones and muscles and hair and stuff that is holding in our energy. Some people call it a soul. It’s you and me. It’s the energy that allows us to think, to remember, to move and control our bodies. It’s the energy that stays inside of us until we die. But then when we die, what happens to it? Energy doesn’t die. It doesn’t stop existing. So where does it go?”

So I went on, “That energy goes outward from you, like it does from a star, like our Sun. Some of it goes back into the Earth where it’s used to create new life. Some of it goes to others around us where it becomes a part of them. Some of it goes up into the sky. Maybe some of it rejoins the Sun while other bits go along with the energy that the Sun is releasing, out into the universe, traveling for billions of years over billions of light years. Maybe some of that energy will find new stars, maybe even stars just being born. And those stars will have new planets around them. Some of those planets will get the same energy from their star that we get from ours and maybe… just maybe, life will grow. Maybe plants, animals… maybe a new civilization, not like humans but just as smart, maybe smarter? Maybe those aliens way out there, way off into the future… maybe one day they’ll look inside themselves and their molecules and atoms and elements and they’ll find traces going all the way back to the start of the universe, the big bang. And along with that, they’ll be seeing bits and pieces of…”

At which point Cameron, 10 years old, jumped up and said “Me!”

I finished off by saying “It’s not as nice and convenient as heaven, thinking that we’ll still be us and fine and happy but it’s also not as gloomy as just closing our eyes and no longer existing. But it’s what I believe will happen to us. I think we’ll rejoin the Earth, we’ll rejoin our friends and family and we’ll rejoin the universe. We might not know it or remember it or really be us anymore but we’ll be a part of something as big and vast as space and time itself. And for right now, while we’re alive and able to appreciate that, I think it’s pretty incredible.”

“The truth is that I don’t really know what happens. No one actually does. We can only make our best guesses and believe what we choose to believe. But now you know what I believe. It’s up to you to figure out what you believe will happen for yourself.” 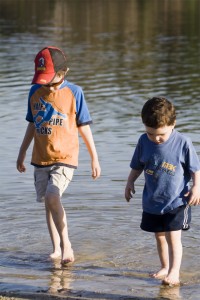 “Because my child has Autism, some say he's not ordinary. But that doesn't mean he can't be extraordinary!”
by Stuart Duncan