The Story of Luke – The autism movie you have to see

The Story of Luke is a movie that I’ve been following closely for some time. Even while they were filming, I was already a fan of their Facebook page and eager to see the end result. I’m very pleased to report, I was not disappointed.

95min. A comedy about Luke, a young man with autism who is on a quest for a job and a girlfriend. Starring Lou Taylor Pucci, Seth Green, Cary Elwes and Kristin Bauer. 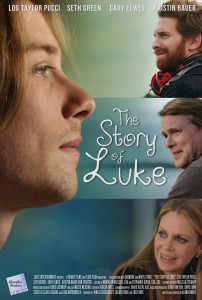 The first thing the synopsis tells you is that it’s a comedy about Luke, which while true, is such a very small part of what this movie really is.

First of all, while it will make you actually laugh out loud in a few places, in others it’ll simply have you smiling and thinking “I totally get that.” While in other places, it will make you want to stand up and shout “You tell’em!!” and then shortly after have you crying your eyes out. And I’m a dad. I’m not supposed to cry. I did.

While this is the story of Luke, hense the title,  it’s also the story of those around him. Because in this film, even though almost everyone around him is “normal”, no one around him is really all that normal either. There’s the sometimes crazy, sometimes wise grandfather who even manages to be crazy and wise at the same time in some instances. There’s the depressed aunt, the midlife crisis uncle, the rebel son/cousin and then the doesn’t fit in with society daugther/cousin. There’s many more that Luke meets along the way as well.

I think the closest movie/story you could compare this to is Adam. I don’t know if you’ve seen that but it’s about a lonely man with Aspergers and his relationship with a girl. In Adam, the movie is very much about Adam, he’s always the focus. But it does give you a very real world glimpse into the life of a person with autism/Aspergers.

In The Story of Luke, while Luke is obviously the main focus, there’s so much more going on. His family evolves, his grandfather evolves, the people he starts to work with all evolve. His efforts, his honesty, his quirkiness and his mere presence makes the lives of those around him change. And it all feels very real. You never get the sense of there being a script or that someone had written this. It all feels so natural, as though it’s a true story.

One big difference I’d like to point out, between Adam and The Story of Luke is that, in Adam, it can be quite painful to watch because you envision your own child as Adam, later in life, living these struggles. It quite literally hurts to imagine your child growing up to be Adam and having a difficult life. It’s very well done in that sense. With Luke however, you never quite get that sense of your child being in his place. And it’s not a bad thing!

As a man on the autism spectrum myself and having a son with autism, I never once got the sense Luke was trying to be me or that my child could be Luke some day. I did have a few dozen “that’s just like my son!” moments though.

Luke stands apart and while very perfectly representing life on the spectrum, he never comes off as representing all autistics, only himself. And that’s quite powerful when you think about it. To relate to him, to see so many similarities and yet, seeing him as being his own man and not just a future version of your own child, is a feat not easily accomplished.

The movie is very much in your face with a lot of swear words, which are very cleverly done actually, very in your face boldness and off the wall terminology that will clearly make little sense to Luke but it’s never done to an extent that you feel it’s vulgar. Still though, it’s probably best to not have the little ones sit in to watch with you if you don’t want them hearing that language.

The movie truly is the story of Luke trying to be a man. Not just to “get a girlfriend” as in Adam but to walk out the door, get a job, get a girlfriend and, as his grandfather would say, “get his $hit together”.

I’ve watched The Story of Luke twice in one day and I still want to watch it over and over again because it’s just so well done. Each and every character is so perfectly portrayed and real. Luke is just so lovable, you really can’t help but want to be there, in the movie, to tell him how awesome he really is. Also, not many movies can shock me with what it says and then make me want to stand up and cheer at how the protagonist responds and then make me want to cry just a few scenes later but this movie does all that and more. And it always feels natural. Like I’m watching real life unfold in front of me.

The Story of Luke is not a movie to put in place of other movies about autism but it’s definitely a movie that you absolutely must include in your autism movie list. You’ll relate, you’ll learn, you’ll adore, laugh and cry.

I guess what I’m trying to say is, I highly recommend that you see this movie.

When/Where to see it

The Story of Luke comes out on April 5th in select theaters but it will also be available on iTunes as well.

Check out the trailer here: http://trailers.apple.com/trailers/independent/thestoryofluke/

← Parenting a child with autism is hard, being chastised for saying so is harder
A life taken away →