Cameron is just about to turn 6, in 15 more sleeps (as he calls it), but has only just started to actually eat solid food.

Well, that’s a bit misleading.. the truth is, he’s eaten pasta and potatoes and rice and such for a very long time but his potatoes were always mashed, pasta always soft… it’s been a constant ordeal at meal time.

Any time we tried to get meat into him, we had to blend it or pick it apart into tiny little pieces that could be hidden in his potatoes. Like, tiny tiny.

Here we had his 3 year old brother eating pieces of pork chops, steaks, chicken… his potatoes were in pieces…. and yet his older brother was still getting a bowl of slop.

If you’ve ever questioned if autistic people could have texture issues with their food, we had living proof.

How did we change it? 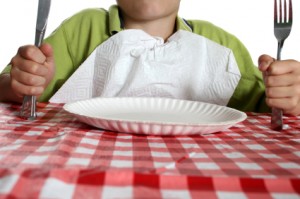 He decided when he was ready. We started slow at first, gave him pieces of potatoes instead of mashed… and for a long time, he wouldn’t touch it. Finally one day, he did.

After that, we started giving him small pieces of chicken… like, very little cubes. To our surprise, he tried them. He didn’t eat them, but he tried them.

We never stopped giving him those pieces though. We always presented him with the options, never being upset if he didn’t eat it. Eventually, he did!

It’s been a couple of months now, we no longer blend or mash his food for him. He now eats a few pieces of meat with his dinner, he now eats potatoes in pieces when the rest of us do.

We don’t have to boil his pasta to the point that it turns to mush.

He still doesn’t eat a very large variety of foods, it’s still mostly pasta, potatoes and rice… and he’s still on a rather strict gluten free diet, but now we can add in a few things here and there that he’s at least willing to try.

He’s almost 6… and it’s going to be a very adventurous year, because along with a whole new year of new discoveries and experiences, he’ll have a whole new diet. It’s very exciting!