Your hands tell me when you’re happy

Christmas was one week away, the excitement building as we prepared presents for friends and family. We laughed as we changed the words to our favorite Christmas songs, drank Egg Nog and opened the next door to find out what shape the next chocolate was in our advent calendars. 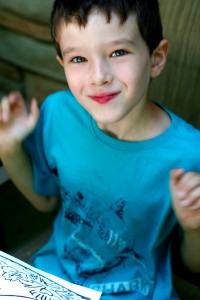 As we talk about Santa and what each of us is hoping for, I lean over to my son Cameron and say “Do you know how I always know when you’re happy?”

I replied “Your hands tell me.”

He smiled and said “because I flap my hands!”

At that point, he began bouncing on his toes and flapping his hands so hard that I thought he might fly.

Beside us, sitting up against my hip, was my dog Spirit. She is Cameron’s best friend and, I think, Cameron is her best friend too.

I said to Cameron “Cameron, do you know how I always know when Spirit is happy?”

I told him “Because her tail tells me.”

Again, the excitement building as he flapped his hands really hard, “She wags her tail!!”

I explained to him that Spirit doesn’t have hands so she wags her tail but I imagine that it’s very much the same feeling. There’s just so much happiness inside that it has to come out.

He got up and gave me a big hug.

“A group at it’s weakest is still stronger than an individual at their strongest.
For an individual will tire eventually, no matter how strong they are.”
by Stuart Duncan