Spread the word to end the word – a suggested suitable replacement 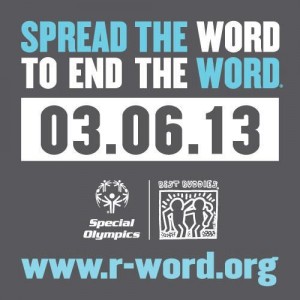 Today is, once again, the day to end the word. The “r-word”.  Really though, it’s every day, isn’t it? They just make official days to get us bloggers all talking about it at the same time. Which is brilliant. But really, we all need to be talking about it any time the word comes up or when ever the opportunity arises. Not to preach to our friends, family or even strangers about how we want them to talk but to suggest that there may be a better way.

That’s how I look at this, as an opportunity. And since I’ve been at this for a while, I think I know my audience (that’s you) pretty well. Which means that I know you’ve already heard about this and more so, most likely already removed that word from your vocabulary. Even if not, for what ever reason, you’ve at least heard of it and made your decision. (although I do hope you’ll reconsider it someday)

Instead, I would ask that you seize your opportunities. As awkward as they may be or as shy as you may be or as uncomfortable as it may become, speak up.

Whether it’s a family member, an old friend or some person on the bus, speak up. Be nice, don’t be preachy, and just gently suggest that you and many people find that word offensive no matter how it’s used or in which way it’s intended. Suggest that, even though you valuable their right to say and do as they please, you just request that they understand that it is offensive to many and to take the time to consider all that this implies.

There is one word that I often suggest as a replacement, not to be used in place of, but to be thought of instead. An r-word to replace an r-word.

That word is respect.

You don’t have to respect an individual, in the way in which you’d respect a peer, but to respect the ideal behind those are trying to do something right. For the good of the children, the children’s parents and everyone around the world.

So no, I’m not going to ask that you not use the word. All I ask is that you take today and any day to speak up when someone does. Be respectful in suggesting that they do the same.

What’s in a word?

“Autism changes how you see the world. If you're lucky and willing, you'll meet an autistic that can teach you how to see it differently too.”
by Stuart Duncan