One thing that most, if not all, people can agree about autism is that it does present it’s share of struggles.

But what are those struggles? And for whom?

Normally a diagnosis comes at a very early age leaving parents to do what they feel is best as they attempt to make life altering decisions on their child’s behalf.

This means finding therapists, finding the right school, maybe battling that school, trying, finding and setting diets that will not only help but that their child will actually eat, and the list goes on.

It also often means some added traveling, lots of extra costs and even extra stress… especially if someone is preventing us from getting the services that our child needs.

Indeed, parents are often all to familiar with the struggles of having an autistic child.

It’s never more evident than when another parent tries to correct you, give you advice or worse, judge you for your decisions.

The people that actually have the disorder have even greater struggles, many of which they likely find themselves unable to explain.

First there is the sensory processing issues. Whether too extreme or too subtle, an autistic child can often be found spinning around, hitting things, touching everything, watching things intently, screaming or moaning for no apparent reason or having a full blown meltdown. Sometimes it’s the lights, sometimes it’s the smells, sometimes it’s the feel of their clothes, sometimes it’s loud noises or consistent noises that seem like they’ll never stop and then there are times that no one will ever know what caused it. Possibly not even the child. There’s just something wrong and it’s too much for their system to handle.

Later there is communication issues, usually due to verbal skills often being delayed. Children want things but are unable to express those desires to their parents or others. Or, as I said earlier, have sensory overload but are unable to tell anyone about it.

Autistics often have issues with foods, whether it’s sensory (taste, smell or texture) or dietary complications such as sensitivities to gluten or casein. They also tend to have problems sleeping through the night, either prone to night terrors or just waking often due to an over active mind or some outside stimulus.

Autistics then have struggles with making friends, being understood as well as understanding others, being in social situations and all those other things that comes with being in school or having a job. Often a target for bullies, autistics tend to be victimized or even taken advantage of as they don’t really understand the motivations of others.

Then there’s dealing with people’s misconceptions (imagine everyone thinking you must be like Rainman), people assuming you must have a really low IQ or better yet, a really high IQ, people never being able to get over the mindset that “there’s something wrong with you” and even the much more simple, yet still struggle worthy, awkward moments where people just don’t know how to behave around you.

Where the struggle is not

Let me say this first, to make it perfectly clear, there really are some people, children and adults, that really are a handful. Sometimes people really are just extremely difficult to deal with as part of who they are and that’s how they want it… those people can be a struggle, whether they have a disorder or not.

Autistics are not the struggle.

You can classify autism itself as a struggle, if you want, but really, the real struggles are the situations and events that may or may not be due to the autism.

Look at it this way, when a child is born deaf, parents don’t see that child as a struggle. The communication barrier is a struggle. Learning sign language is a struggle. Finding the right services is a struggle. Having to afford special devices around the house can cause a struggle. But the struggle itself is not the child.

Likewise, with autism, the person is not the struggle, unless they go out of their way to be rude, unkind, unhelpful or what have you. But as a general rule, being autistic is not a valid reason to think of the person as the struggle itself, or the cause of your struggles. 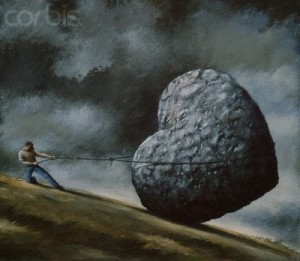 When you think of someone as a struggle or a burden, you’re essentially reducing that person down to some kind of heavy load that will weigh you down as you carry them with you. And that’s not really how you see them. At least, I hope not. Because they’re not.

A heavy load, weighing you down or a beautiful soul and a wonderful person that can lift the spirits of others?

Because that’s the choice you have to make. It doesn’t matter what struggles you have, it’s all in how you view yourself and others.

Once you make that choice, you’ll see just how separate we all truly are from our struggles after all.