Autism – The (not so) Invisible Disability

Autism is sometimes referred to as “The Invisible Disability” because it can be difficult to spot, especially if you are unaware of the characteristics that define autism.

Chances are, if you know autism well, you know that it’s usually far easier to spot an autistic when they are exerting themselves physically, like running and playing.

I can’t help but feel so very bad for Cameron when I see him run, his arms flailing about, his tongue sticking out, his legs all wobbly… he really has very little control over his own body. He sure does try hard though! I think that’s why he’s that much more disappointed when others are faster than him.

Today, while out for a walk in the woods, we put our two boys off on a race. Tyler, who is 4.5 years old and Cameron, who is just about to turn 7.

Normally, you’d expect a 7 year old to beat a 4 year old in a foot race but in this case, neither my wife nor myself were surprised when Tyler was able to get to the finish line first.

And it’s not that we’re disappointed. We’re not. All we ask is that they try. If they give it their best, we’re happy. But Cameron doesn’t see it that way.

It really hurts because I don’t know how to help with that. I mean, yes, you tell him to keep trying and that practice will help him to get better and faster.

But what kid believes that when they feel completely defeated?

Perhaps it’s best if I just show you. This is the video of my boys having a race from their mother, to me and back again.

I do believe though, that this is not a life sentence. Autism itself is but like all other characteristics, like all strengths and weaknesses, this can be worked on, improved and even perfected.

Given time, dedication and persistence, Cameron can become a great runner. He can even become the fastest, if he worked hard enough at it.

But as I said before, all I would ever ask of him is that he try. And that is what I want most for him. For both of my boys.

So no, it’s not an invisible disability. At least, not for every person that has autism. Sometimes it is very much visible and makes for a very large hurdle.

My boy gets down on himself because of this. He doesn’t understand. But I do. It’s not invisible to me.

How to Maximize Learning in Autistic Children?

Children with autism usually have difficulties in learning because of the impairment in their social communication and interaction with others. Moreover, the repetitive tasks and restrictive behaviors and interests also prevent them to integrate to the learning process. Children with autism are best described as children having their own world” so allowing them to learn in a conventional way will not be effective. 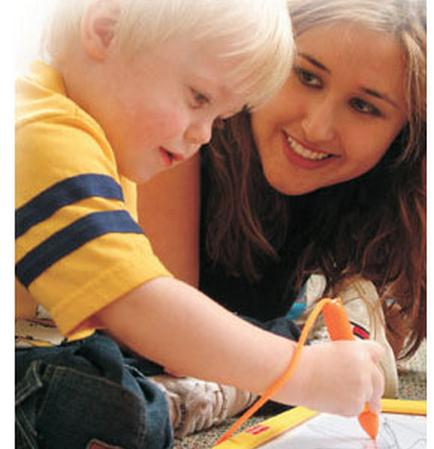 Parents of autistic children will do the best way they can and try all possible things just to help their children learn. Parents would usually seek help from experts on autism regarding the treatment of their child. If your one of those who has an autistic children or just a concerned individual wanting to help children with autism, here are the following tips to maximize learning in autism:

The first thing that autistic children need is early intervention. Autism usually can be observed even during infancy. Parents need to monitor the growth and development of their child to identify possible delays in the language and social development of the child. The earlier the diagnosis will be, the earlier the interventions are, which significantly dictates the outcome of the treatments. Before the age of 3, children with autism require one-on-one therapy in order to improve behavior, language, self-help and social skills of children.

An autistic child should never be confined at home because this will just limit their worlds to the home. Children with autism need exposure to the community, school and other social settings to maximize environmental effects to learning. Through social exposures, autistic children will be able to adapt in some way with the presence of other people.

Autistic children will eventually develop language difficulties, which prevent them in dealing with other people. In this line, speech therapy will help children adapt to social interactions although they really do not develop the learning and language abilities of average children.

Auditory integration therapy is a means by which autistic children are exposed to sounds in order to reduce sensitivity to sound frequencies. Autistic children are usually sensitive to various sounds, which prevents them from their learning. Auditory integration therapy also involves music therapy to enhance and stimulate communication abilities. Parents can employ music therapy even at home such as playing neutral and soft melodies to help children to be calmer.

Autistic children also require special education rather than having them in regular schools. Special education caters to the specific needs of autistic children and also improves the mechanism by which children adapt to learning. Special education does not focus on teaching children the basic reading, writing and arithmetic skills, but focuses on improving the social interaction, language development and behavioral modifications. In order to maximize learning in school, parents should choose carefully the school that will provide the best education to their autistic children. For maximizing learning, the author recommends ABC mouse which features books, songs, games, puzzles, art activities and even printables. Read ABCmouse Review to more about it.

Eventually, autistic children will be left on their own especially when their parents will eventually age. In this line, life skills education is also essential to help children go about with the everyday tasks such as self-care and feeding.

Aside from these learning techniques for autistic children, they need unending love and guidance more than anything else. Autistic children who are loved and guided appropriately by their caregivers are able to adapt more and learn more. Those who seek love and attention most often experience deterioration in their cognitive functioning that will eventually make learning more difficult.