How did ‘cure’ and ‘acceptance’ get to be such bad words?

It’s no secret that the Autism community is quite divided on many topics and I’ve even written before about how easy it is to offend one side or another depending on what you say.

For the last 4 months, I had been trying to organize a rather large campaign to get as many people to write about “Understanding and Acceptance” for those that live with Autism every day.

It’s done well but has perhaps also added fuel to an already hot topic. One that has turned two very good, very positive words into opposing sides of a war.

This word is often used in finite terms, such as how antibiotics can kill a virus or infection and leave you without a trace of the offending agent of illness.

The issue here is that many people with Autism (especially Aspergers) and even those that love them, feel that autism is a part of what makes a person the person that they are. It affects every aspect of their life from birth to where they are today and to remove that would be like removing a part of who they are.

When a loved one (usually a parent) is presented with a child that is “low functioning”, they would love nothing more than to cure their child. Some children (even those that are of adult age) are unable to speak, use a toilet, live independently, they hurt themselves, wander off with no idea what they’re doing or where they’re going… they’re unable to express themselves, their feelings or desires.. they’re trapped.

What results is the people from group a (Aspergers/high functioning) often resenting those from group b (lower functioning loved ones) for wishing to “remove” a part of their children. They consider it quite offensive to think that Autism is an invasive illness that needs removing.

Acceptance is the cornerstone in giving women equal rights, abolishing slavery and in squashing racism… it is therefore considered necessary to give those that are different a chance to co-exist as equals among those that are “normal.”

Many people view Autism/Aspergers as a gift, an ability to think and visualize the world in a very different way from a person without it, however, it also comes with some complications in that their senses may over load them, they are unable to socialize as easily or effectively and may need some “allowances” from people such as added patience and understanding in both their professional and personal lives.

Should people learn to accept and understand these differences, not only could those with Autism/Aspergers excel but may be able to excel much further than anyone has before them in their field!

Well, the problem is that it’s all well and good for those that can work, those that can socialize even if only a little but for those parents/loved ones who witness their child being bullied, beaten, isolated and even institutionalized because they don’t even have a chance at acceptance since they are unable to truly interact with the world to begin with, acceptance is not only impossible but it’s a source of anger.

They can’t even think about acceptance because without a cure, there will never be acceptance… and if they had a cure, why would they need it?

The disconnect here happens because people view the world in black and white… there is their world, and then… well, that’s it. Their world. You can’t blame them if it’s someone they love, especially a child. You very quickly learn to not care about other people’s rainbow coloured happy places when you want your child to simply have a chance at a normal life and people attack you for it.

Likewise, you can understand how someone, anyone really, would get upset when others think that you should have a part of yourself removed because they don’t think you’re good enough the way you are. If you have any self worth, any self confidence, you are more than happy with who you are and don’t care what anyone else thinks.

The thing is, there’s a world beyond our own and we can’t push our world onto other people. What someone wants for themself isn’t necessarily a reflection of what they want for you… or how they view you for that matter.

Likewise, I’m sure most people with Autism/Aspergers that can fend for themselves would never want a parent to have to take care of their child forever.

These are not bad words and certainly not a cause for hatred. We just have to stop taking things so personally. We have to learn to accept that there can be a compromise.

A new way to think about old words

Perhaps a cure doesn’t have to mean “removing all” and instead can mean “removing the barriers”… implying that they’ll still have autism but maybe now they can talk, leave home, hold down a job and start a family of their own.

The world isn’t black and white. And the world isn’t just about you. We can co-exist… and understand that people want what they want and that they have their reasons for wanting it.

Awareness is not enough. This is what Autism is to me

Awareness is not enough.

We (The Autism Community) need for you to know what Autism is.
We can only achieve that through Autism Understanding and Acceptance.

Awareness of autism has risen dramatically in the past few years, and awareness is certainly a good place to start. Increased awareness has helped parents get earlier diagnoses for their children, and it has helped secure funding for research. However, it hasn’t done much to change public perception of what autism really is.

Autism is a part of who they are.

The media has focused almost entirely on children with autism – but children grow up. In a society where one in 110 children is diagnosed with autism (the latest figures from the Centers for Disease Control), no one can afford to ignore the significance of this disability. People with autism are children, teenagers, adults, men, women, scientists, programmers, engineers, unemployed, in care homes … too many of them continue to be bullied, to be judged, or to just be ignored.

Each person is unique. Each person has their own unique set of strengths and weaknesses just like you or I.

The charities, the organizations, the groups, the parents, the people with Autism themselves… we ask you… no, we need you to know what Autism really is.

Today, we ask for your Autism Understanding and Acceptance.

This is what Autism is to me… 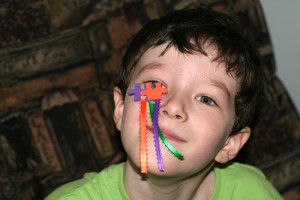 Autism, to me, is a part of who my child is… for better or worse, beautiful or ugly. Yes it causes extreme temper tantrums, misunderstandings, dietary issues and more… but it also shows me a side of life that I would have never seen before otherwise. A whole new profound way of looking at the world.

It’s because of Autism that my son will kick and throw things as he enters a rage filled meltdown that is completely beyond his control.

Probably what hurts most, however, is the looks and comments and judgments that others make while we’re in public. Whether it be a meltdown at a grocery store or even a physical activity where my son clearly isn’t as “in control” as the other children. Being different, to most people, is a negative thing.

It’s for this reason, that Autism to me, has become my purpose. Actually, my son (both of my boys to be honest) are more important than Autism itself, but they’ve given me my purpose in life… to not just raise awareness of Autism but to try to help others to understand it better and to accept those that have it.

And not just children… but teenagers in high school that are being bullied or even beaten… and adults too that may still be living with their parents or at the very least, struggling at keeping jobs and a social life.

Since my son has been born, and more so, since we’ve received his diagnosis, I’ve learned so very much about Autism and yet I still have far far more to learn.

Not to change my child because my child is wonderful, amazing and every bit as deserving of a everything that you and I have as we are.

My purpose is to change the world around him… by talking to anyone that will listen. By giving them just a little bit more understanding… and hopefully, helping them to accept my son and everyone else with Autism.

That’s what Autism is to me.

“Autism is neither a gift nor a curse. It just is what it is. Focus on the person. They're the true gift.”
by Stuart Duncan