Autism has made one thing easier: family listens to us

My wife and I were talking this week-end about how things have changed with our family, both hers and mine. In the beginning, as we found out that we were expecting our first child, we got a lot of the usual “get ready to get no sleep for the next 18 years!” type of remarks, as all expecting parents do.

Then we faced the ridicule of wanting to keep up with todays standards in safety: “Bah, my kids never had to sit in a car seat and they’re fine!”

We continued to get the “we were parents long before you were” speeches long after our first child (Cameron) was born and even after our second child (Tyler).

Even when we began telling everyone of our Autism concerns, we still got all the ‘advice’ you’d expect, such as “some kids are just like that” or “he’ll grow out of it, stop being a worry wart”. What is a worry wart exactly anyway?

It was very frustrating because every parent wants to set limits, rules and boundaries for their children and we all know that grandparents love to spoil their grandchildren. But all family has this “we are parents too, we can spoil your kids, they’ll be fine” attitude and it can be very frustrating for parents that just want everyone to listen to your wishes.

Autism has a way of changing all of that because suddenly it puts them on the same level playing field as you… the unknown.

We found that all the remarks, all the advice, all the ridicule for our choices faded away in that moment, but never really left because what would parents (who are now grandparents) be if not supportive?

Even still, what really made the largest difference was when we were able to really make them “get it”… and for us, that defining moment was when they watched the Temple Grandin movie, or when they could find their own videos on Autism.

Once educated on just how very different it can be and how well versed they had found out that my wife and I had become on what is going on in the world of Autism, they really backed off.

Not just the remarks and such, but also on questioning our decisions. If we decide something is best for Cameron, or if we decide that he goes to bed at a certain time, or if we decide no one in the family feeds him without us being there… they do not question it anymore. They certainly don’t argue it either.

It has been a long and very frustrating road at times but it’s great knowing that finally, after all this time, they see that we are capable, that we do know what we’re doing and most of all that we not just like every other parent that’s had a kid.

To be clear, we still value input from our families and our own parents, but the fact that the questioning, doing things against our wishes and ‘spoiling’ is over… is so very much appreciated.. I can’t even put it into words.

The big shock, for me, is when other parents started coming to me for advice, which also comes with the Autism diagnosis, but that’s for another article.

Do you carefully select which photos based on whether or not you can “see the Autism”?

My wife and I took some photos in the backyard this week-end, she wanted to try to get group shots right without having someone be out of focus… this meant that I had to get my 2 boys in close with me for some family photos.

As we went through the dozen or so photos, we settled on two pictures that were ok and put those online. But even out of those two, we only ever really used one of them… I use it for my Facebook profile picture right now.

We’ve always done it but it wasn’t until this week-end that we really started to put some serious thought into it.

On one hand, we want these pictures to look back on and we want to see the wonderful little boy as we always see him, a regular kid living his life as he should. And being rather well versed in Autism now, we know that later we’d look back and go “oh… yeah… you can see the Autism so clearly”.

On the other hand, is it kind of deceiving, or even lying? To be showing these pictures to everyone as if to say “this is it, there’s nothing more.. no other pictures.”

I like to think that we all do it, right? Bad hair pics, blinking, food in our teeth, acne breakouts, gut hanging out the wrong way…. we pick the best pics of the best and share those ones. It’s quite a natural thing to do, we want to look our best.

Still though, I can’t help but feel like I’m doing something wrong when I do it. I love that I can put a smile on people’s faces when they see this great kid being happy and being a kid… but I feel like I’m not telling the whole story too.

On the flip side, almost every photo I see online where you can blatantly “see the Autism” is usually accompanied with some caption like “Can you tell which child is Autistic?” and that kind of bothers me. They say that you can’t just see that a child is Autistic like you can some other disorders/disabilities but as parents we know, if you take a hand full of pictures, you’ll see it.

I think I could talk in circles about this for a very long time, trying to convince myself the goods vs the bads…

This post wouldn’t be complete without some examples, so I’ll use the two I mentioned earlier. 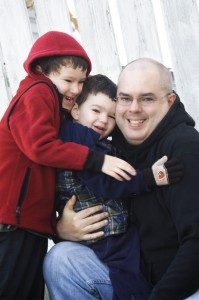 It’s so subtle and yet, so glaringly obvious. Keep in mind that this is one of two that made the final cut out of more than dozens. And in comparison, the next photo, which is the one I used on Twitter and Facebook. 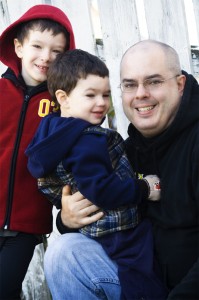 Nice smile, just a natural part of the picture

You can see how much of a small difference there really is but when you know what you’re looking for, or avoiding in this case, it’s a big difference. And as I said, I feel like I’m not telling the story accurately by favouring one photo over another, but I just can’t see myself changing that. I choose the better photo because that’s what I do, that’s what everyone does.

Do you find yourself choosing the photos where you don’t “see the Autism”?

This week-end was a big family week-end, there was a lot going on at all times. To cut right to the chase, my boys were playing with their cousin and while wrestling, Cameron jumped and landed with his butt on his poor cousin’s head… while she was laying down on the floor.

Suffice to say, it hurt her quite a bit and the playing promptly came to an end.

The boys came to find me and told me that she was crying but didn’t tell me why. We had to track her down and find out what happened.

I don’t think anyone ever questioned it but I could just tell that if anyone else had put much thought into it, it would appear that Cameron had no remorse about it at all, he just went off and played with something else.

But I could tell, because he was in the opposite end of the house on a different floor, playing by himself. You wouldn’t know it just to look at him, but he felt bad about it.

A little while later, when I was alone with him, I tried to talk to him about it. The only way I could think of to get it through to him, which is what I’ve always done with him, is to ask him how he’d feel if it was someone jumping on his head.

It seems that, for the most part, he does not understand nor realize in the slightest just how much his actions will hurt someone else, but he does know what would hurt him.

And so the only way I can make him understand how to be careful or avoid certain things is to think first about how it would feel if it was done to him. Naturally, when playing, there simply is no way for him to stop and think about it like that. He just does what he thinks is fun.

I mean, this is a tricky enough topic for any child to learn but when you have Autism in the mix, there’s just no way for a child to understand how their actions will affect the person they’re doing it too. Especially when it comes to another person’s 5 senses, such as touch. Pain is just too foreign a concept to know how others would experience it.

But like everything, this is a learning experience and he felt really bad about it. So even though he likely doesn’t quite get the whole concept of what happened, he does know what he did wrong.

Yesterday I received an email asking that I help spread the word about a study on Autism. Not just Autism itself but on life histories of those involved with Autism. This is the email:

Please give them a visit and get involved if so inclined. Information gathering is so important and sharing our stories is what helps others live out their own stories.

The boy who couldn’t say “good-bye”

People tend to have a lot of questions about “feelings” when the topic of Autism comes up, the most obvious topics covered are the temper tantrums, the lack of eye contact and the refusal to hug or show love.

The questions range from the simple “why” to the more absurd “do they even feel love?”

Cameron is a very special boy who’s overcoming the odds, going from mild-severe Autism to… well, many people question if he was ever Autistic in the first place. However, he still is extremely reluctant to hug anyone, kisses are even more rare, temper tantrums still get the best of him…  in short, he still has Autism. But he’s doing so well.

One thing that has remained constant and I suspect always will for the rest of his days, is that he absolutely refuses to say “good-bye” to someone when it’s someone he loves and someone he knows he won’t see again for a while.

If he knows he might see you in a day or two, or if you’re just some random person, he might say it… more than likely you’ll get a “thank you” or a quick “bye!” to get him out of there.

I have yet to hear him say it to someone and mean it… to someone he cares about. I doubt I ever will.

And you know what? Those that know Cameron, they get it. And they know they’ll never hear him say “good-bye” and they are just fine with it.