Hooray for the Tooth Fairy!

Cameron lost his first 2 teeth in the month of September… that’s 5 years and 2 months old for those of you keeping score. Both were the front bottom two teeth. 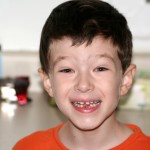 That’s not to say that his life is so bizarre or out of the ordinary that this is a completely unique feeling, but it’s still wonderful all the same. A lost tooth was definitely something that we thought could have lead to quite the meltdown or possibly some anxiety anyway. Sometimes you just crave those moments where you’re not thinking about the screaming fits, the therapy sessions, the talks with the teacher…. and so on. It’s just another day in the life of a child, as it should be.

And so here we have this toothless wonder, super happy that he’s getting to be a big boy, super excited that the tooth fairy comes just for him and gives him something super special that is just his own.

It’s pretty fun for the parents, any parents… but when most things are either delayed or don’t go as you might expect, it’s just that much more fun for me and that much more wonderful.