Now I lay me down to rest

For me I go into their room before I go to bed (about 2hrs after they’ve fallen asleep) and I talk to them. I whisper encouraging words, tell them what they did well that day, tell them I love them, kiss them and snuggle them back into their blankets. I never ever skip a night unless they are spending the night at my moms or something and I physically can’t. It’s something that allows me to see them in their most precious moments and gives me time to focus on their positives even if it’s been a bad day. It helps me reset for the next day. I started doing this when Cameron was a baby and have kept it up all this time.

It’s true, she never misses a night where as I may from time to time. She’ll even get in there even if I already have. But we both pretty much do the same thing. We both tell them they’re “awesome” or that we love them, we both kiss their forehead or cheek… we both just need to check on them each night.

After my wife mentioned it, I got to thinking about it, and it reminded me of another article I wrote where I explained that I believe a child with Autism takes in a lot more of their environment than a child without Autism would. 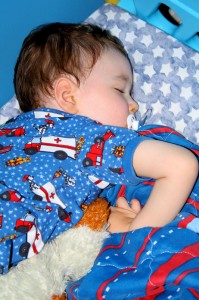 I started to think about it, I came to realize that I was putting my own methods into practice… as was my wife. I mean, I’m fairly certain that the whole “play classical music while they sleep” thing works on some subtle level for all children but for those where Autism is involved, I think that they absorb that even further.

We honestly believe that telling him that he is a good boy, that he’s awesome, that he makes us proud, that he did certain things very well… all these things add to who he’ll be the next day and for the rest of his life.

We certainly do not exclude his little brother either, even without Autism. Because he deserves the same attention and love and words of encouragement. He might not take in as much as his older brother, or maybe he does… it doesn’t really matter.

It’s a very small thing, it takes a minute or two, it’s when we have nothing left to do but to crawl into bed anyway, but I think… we both think… that it’s extremely important. That it’s something we must do because they deserve it.

And even if it turns out that they never actually take in a word, that it never does have any effect on them what so ever, it’s still worth doing. It’s still important. It’s important for us, not just to us.

Do you do anything like this? Do you think children can hear/feel these things even though they’re asleep? 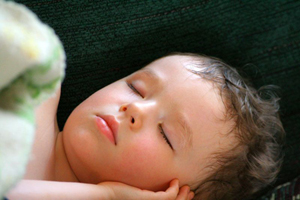