Overcoming Self Doubt as an Autism Parent

The hardest part, I think, to being an autism parent is the doubt. Not just in general but the self doubt in particular. 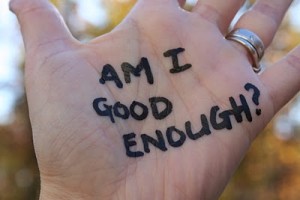 It doesn’t really matter where your child is on the spectrum, we all ask ourselves the same questions.

To be fair, these are questions that pretty much all parents ask themselves but it’s just so much more so when your child has autism (or any special needs).

I’m not supposed to write this… I’m supposed to keep up the illusion of competence. Some people believe that I’m a wonderful father and I have all the answers…

People visit blogs like this for that. They like to be able to relate to the struggles to… but mostly, they look for the positivity. Especially from me. Because it’s what I usually do.

My wife often bugs me about being “the great autismfather” on the internet because I get some great feedback from readers and on social networks but the honest truth is… I have doubts. In the future. In what I’m capable of. In myself.

Right now,  I’m not making much money. I’m not sure what to do about certain behaviors that we just can’t seem to get our son out of. We have sports and other events coming up in the summer that we can’t afford, we’re not sure we could take time away from work for or that our son would even be ready for socially or physically.

Don’t get me wrong, this isn’t a pity post. So please don’t leave comments telling me to keep my head up, or to offer me advice on how to get through it…

I’m sharing this to prove a point. Even if you think someone is a great parent, even if you think they’re a perfect parent… no matter how confident or smart or wise or positive they may seem sometimes… you will still find self doubt. That person will still be asking themselves the exact same questions you may be asking yourself.

When it gets to be too much

The point is, it’s ok. It’s perfectly natural to ask those questions and to doubt yourself. Everyone does it. Some do it more than others but everyone does it.

The problem is when it takes over and moves into the realm of depression. Because then, your self doubt starts to become a self fulfilling prophecy. You will fail where you wouldn’t have otherwise.

For me, and I’ve seen it in others too, when I start to hate myself too much for not being able to do enough… I have a hard time finding the will to do anything. So I don’t. And then I hate myself for that too. And it spirals.

I guess the trick is not to dwell on it. If the self doubt is going to be there, no matter what, then don’t dwell on it. Because when you do, when it’s all you think about, it consumes you.

Either you wake up the next day, shake it off and tackle what ever that day has to offer…. or you don’t.

That’s when your strength, smarts, income, abilities and everything else won’t be what holds you back, it’ll be your self doubt.

Focus on the positives

They say to think happy thoughts and just be proud of yourself for who you are and what you’ve accomplished. I’m not a self help guru so I can’t really put it more eloquently than that. Nor am I very good at dealing with my own self doubt most of the time which definitely makes me one of the least qualified people to guide you through it.

But I will say this… my children are happy. They’re fed. They are wearing clothing.  They are out of the rain. They love me and they are loved too.

I’m not sure how long that will last, because I have self doubt. It’s in my nature to think that I’m not good enough going forward. I’m a parent. An autism parent.

But for what it’s worth… right now… I’ve done better than I thought I would. So maybe I’ll do better in the future than I think I will too.

And I bet, if you have self doubts, you too will find that if you look around and take stock of all that is in your life right now… you’ll find that you haven’t done half bad either.

It’s ok to have self doubts. But it’s also ok to slow down once in a while, keep an open and objective mind and appreciate what you have.

You’ve earned it. You got you there.