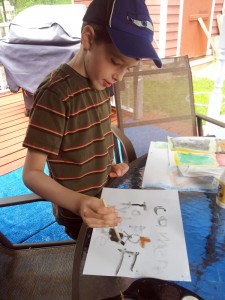 We made the decision to move pretty far away from my family before Cameron was old enough to start school, in an effort to get him into a school that would suit his needs rather than force him to conform to the needs of a school around here.

It was a big move as it meant separating my children, and myself, from my family. It’s an 8 hour drive so it’s not so far that we never see them but it’s far enough. Plus with extreme weather conditions where we moved, we basically only get to see my family once a year.

A year isn’t really much to me or my aunts, uncles or my mom… because we’re all adults. But to a child that is only 6, or 4, as is the case with Cameron’s little brother Tyler, a year can make a huge difference.

There’s extra inches, there’s maturity in their face, a wider vocabulary, a better sense of humour and in the case of a child with autism, like Cameron, there’s progress.

Yes, Cameron is taller and smarter now but it’s the fact that he’s willing to actually talk to people that really shocked my family. Not just talk but have real conversations.

That’s thanks to the hard work of his great teachers at the school, his therapist, our own hard work at home and of course, Cameron’s very hard work to be willing to put in the effort to try. If he didn’t want to, and I’m sure a big part of him did, he could have just shy’d away and refused to talk to them. But he didn’t, at least, most of the time anyway.

More so than that was his need to get changed in the bathrooms, not wanting anyone to see him naked. At 6, this probably should have happened earlier but as a child with autism that is not overly fond of wearing clothes as it is… it’s really a very big deal.

It’s very gratifying, as selfish as that is, because it justifies, at least to me, our decision to take our family so far away. And my family sees that and understands our decision. They understand why it is that they now only see us all once a year. I mean, they understood the decision when we made it but now we have results.

And I’m proud too. Not of my decision or of myself but I’m proud of my son. I’m proud of Cameron for making that effort to talk to people and even play with them sometimes. To get off the couch and go outside to play with the other kids a couple of times.

I’m proud of him for making so much great progress so that when we do see my family, he can impress and even amaze them.

Not every parent is able to pick up and move and certainly, not every parent sees these kinds of results from year to year… so I’m so much more grateful than any words I write here could convey.

Even if you had never heard of such a thing before, I’m sure you can identify with what it is. A comfortable rut is a period of your life where things are just easier to keep doing them as you did the day before, rather than make a disturbance that would be deemed uncomfortable even if it means moving forward.

The most popular of these would be diets, or lack of exercise… or both. Basically you get into the habit of eating the foods you like, you can’t find the time to exercise and eventually it’s just easier to just gain weight even though you don’t want to.

In the case of parenting a child with Autism, it’s a very very easy rut to settle into.

What happens is that you try various diets, various programs, therapies, routines and everything else until eventually something seems to work… something starts to show results and in a little while, it becomes comfortable.

And a few months later you start to realize that your child has been eating the same 4 things every day because it’s just easier than fighting or dealing with the issues that come from not eating. You just start getting used to sleeping at certain times and not sleeping at others. You start dressing your child in the same 3 or 4 outfits (if you’re lucky) because it’s less of a fight to put it on them.

What is the difference between a routine and a comfortable rut?

Well, a comfortable rut sees no progress. There’s no moving forward. For example, instead of trying new foods or dietary supplements or pushing your child to break boundaries, you just keep feeding them the same old thing.

A routine involves doing the same things at the same time but can still be a push forward. For example, when eating with Cameron, we eat at the same time, and he generally eats the same meals but, each day we get him to try something new. Even if it’s just a bite or just a nibble, he tries it. Some things he’s liked, such as combining his cheese and gluten free crackers. Others, like fish… he did not like.

That’s progress while still being in the same routine.

Cameron would prefer to wear the same two Super Mario shirts every day for ever if we let him, which would make for a comfortable rut indeed. Instead, we dress him similar yet different shirts… nothing that will irritate his sensory sensitive skin too much but something that will be less than the most comfortable thing he could wear.

You’ve all heard the motivation speeches, the leaders talk and the get rich guys go on and on… push your personal boundaries if you wish to become more than you are! Well, why wouldn’t it be the same with your kids, especially if Autistic?

If you want your child to get out into the world and be independent, whether your child is very severe on the spectrum or very high, you must push their boundaries if they won’t do it for themselves.

I know, it’s really easier said than done in most cases but I never said it would be easy.

I’m not going to get into the specifics of it or anything because your doctors/therapists will likely be able to help you more than I could if they’ve worked with you before. Moving forward doesn’t mean you stop what you’re doing now, it doesn’t mean breaking from routine… it just means getting out of that comfortable rut and doing it!

Shortly after getting Cameron diagnosed, we quickly found ourselves in a world of waiting as programs and services were all under funded and over filled. Because speech was our biggest priority, we bit the bullet and forked out the $150/hour it took to get our son in for speech therapy right away… the condition was that my wife, his mother, was able to sit in for each session to not only be a part of it but to learn what methods to continue reinforcing once our son was home.

After a little while and some good progress, the free speech therapy program was available to us which, at the time, was very welcoming since we really were in no position to afford $150/hour. So we quickly shifted him into the new program where we quickly realized that not all therapists are created equal.

This lady would give Cameron a toy and a task to perform with it, if Cameron wouldn’t or couldn’t do it, she would take his hand and force him to do it. Now, I would have thought that lesson #1 with Autistic children would be to know better than to even make contact, much less hold them and position them in such a way. This sort of manipulation did not sit well with Cameron and he got quite upset.

Then, once the task was performed, she demanded that Cameron put the toy away immediately after. He had just started to use this new wonderful toy and was now being told, and then forced to put it back.

This kind of hand holding and give and take process with the toys was very counter productive and would ultimately set him back several weeks. Rather than learning how to speak, he was learning how to regress… to shy away back into his shell further.

Luckily my wife is very hands on, she stays home with him full time and was able to be there to witness this. After discussing it together, we felt that we had no choice but to speak up and insist that my wife be in the room during these therapy sessions… and that most of all, that some things are made clear, and changed.

I’m sure you can tell by my tone that we expected a struggle in getting this to happen but no, they were very receptive and even though they suggested that she not be in the room, they allowed it, and they changed how they approached our son.

We saw immediate results and Cameron did very well, so long as she never grabbed him by the hand and she gave him ample time to explore and discover the toys he was given.

The lesson we learned was that you can not just hand over your child to anyone, no matter how well trained, how well paid or how highly recommended they may be… ultimately no one knows your own child as well as you do and what they think will work for most children might not work for yours.

Since then, we’ve been to several other programs and are even getting started with some programs now and the first thing we tell them is that we insist that his mother be there during the sessions. If they truly want what is best for our son, then they won’t deny us.

“The simplest "Do's and Don'ts" list for Autism ever: Do accept. Don't judge.”
by Stuart Duncan