To the autism moms for Mother’s Day 2014

When the “experts” say “some children just talk later than others”, you are the one that insists there’s more and gets it right.

When the “know it all” posse questions your every decision, you stand strong.

When your child falls down, you teach them how to get back up.

When your child struggles to learn, you find new ways to teach.

When others call it a temper tantrum, you know your child is actually in pain.

When others say your child needs a firm hand, you offer a calm voice.

When bullies try to knock your child down, you are the one to lift them up.

When depression tries to steal your child’s self esteem, you reinforce it.

When the school tries to force your child into a standard mold, you shatter that mold.

When your child’s heart is broken, you are the glue that puts it back together.

When your child moves out to be on their own, you are the one that prepares them.

When your child has a set back, you get behind them and push them forward.

When your child needs you, you drop everything to be there.

To the single fathers, the legal guardians, the kind souls that see all children equally and of course, to the mothers… Happy Mother’s Day.

This one is for the moms 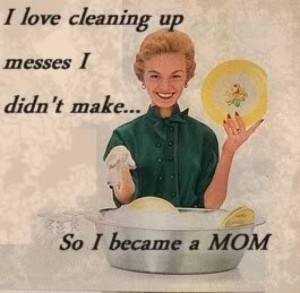 Here’s to the moms…  with your messy houses, dishes in the sink, clothes on the floor, toys everywhere, late nights and early mornings… you deserve far more than a day and far more than a thank you.

Here’s to the moms… you don’t need to be called “warrior moms” any more than a lion would need to be called a “lion cat”, you have stood up to school boards, governments, insurance companies, bullies, nosy neighbors, stereotypes, judgments, assumptions and everything else that the world could throw at you and while not every battle is a victory, there has never been defeat.

Here’s to the moms… you sacrifice, sometimes literally, everything for your child, you think that lack of sleep or social life is a minor frustration in the grand scheme of things, you will go without food before your child ever does, you would literally take a bullet for your child if necessary.

Here’s to the moms… your day does not belong to a 9 to 5 schedule, you don’t get 2 weeks of vacation each year, you don’t have a cushy retirement to look forward to for your work, you know that being a parent, God willing, is for life… and you wouldn’t have it any other way.

Here’s to you… a human being, doing your best with what you have. Living life as both a guardian and a friend, a teacher and a student. Not doing what you do because you have to but because it is what you do.

Mother’s Day – Remembering how I got here

This is the first part of a two part series. This post, I dedicate to my mother who gave me the strength and experiences that I needed to be able to handle what ever might come may way later in life. It turns out that it is a good thing she did. For that and all she did, I will always be eternally grateful.

I have one of those minds that remembers the craziest things… things from when I was 2, things that everyone else has forgotten… I remember where the scar on my knee came from even though I got it when I wasn’t even old enough to walk.

When you have a mind like that, you have to realize, everything has a lasting effect on you. Everything. Some things have more or less of an effect than others but it’s all there… all the time.

I’d like to tell you about the one thing that sticks out the most in my mind. It wasn’t from my toddler years. It was from my teen years… you know, those rebellious, often depressing, very overwhelming years.

My mother was what you would probably call “the problem child.” When your mother tells you that they’ve done it all, that there isn’t anything you could do that they hadn’t already done… well, in my mother’s case, it’s probably more true than for most.

She went on to become a paramedic and then a nurse and now works for the city in a government job… she’s done quite well for herself despite what may have been a “troubled” youth.

When I was a teenager and friends (and not friends) were drinking or even doing drugs…. I was a rather depressed kid. I didn’t do any of that stuff and had no interest in it. However, that didn’t stop friends from trying to convince me to “lighten up.”

What my mother told me, which might not be what most mothers would say, really stuck with me. I’m going to paraphrase it but this is the general idea:

I’m not saying you should try those things but I’m not going to tell you not to either. You’re a very smart boy. I’ve done just about everything that you could do so I know that you’d be alright if you did too. If you really want to try things, I won’t stop you. Just be safe and know I’m always here if you need me.

Ok, I paraphrased a lot.. it was a good talk and it wouldn’t make sense if I told you exactly how it went without context. But I think you get the idea.

What my mother gave me was the freedom to fail… at the time, I thought “How strange. Why would a mother tell her son to go ahead and do stuff that he could get addicted to and then… who knows what would happen?”

We all know that telling a teenager not to do something is the same thing as pushing them to do it. It’s not until you are given a choice that could shape the rest of your life that you realize a few things:

And in giving me that choice, made a huge impact on who I am today. I see my own children in a way that I know is very different than I would have if I had never had that talk with my mother. I’m not sure if it would be better or worse exactly, just different.

Children of my own

As you know, I have one child with Autism and one without. Would I have the strength, patience and understanding that I have now without my mother having faith in me that day? Possibly, it may have been a little different though.

Autism is one of those things that makes your parenting experience unlike anyone elses. Parenting in general is hard enough but when milestones are missed and all the other challenges that come with Autism, you find that you need to be so much more than the parent that everyone else told you that you’d have to be. It’s so much harder, so much more challenging.

For me though, it’s ok. I learned a long time ago that I have the freedom to fail. Not to fail my children, but to not have the answers. To not be able to be strong every single day of a year’s worth of sleepness nights. To get angry when other parents judge me because my son has a meltdown in public.

The world still scares me and I still want to protect my children but I now know that they will be fine. When the time comes, when they are uncertain of themselves… I’ll have faith in them. I know they’ll make the right choice.

She didn’t say it, but she taught me the most valuable lesson I have learned in my entire life, simply by giving me the choice:

“Children with Autism grow up. It's time the rest of the world did too, through understanding and acceptance.”
by Stuart Duncan