Father’s Day in the autism community is becoming something amazing

Since getting involved in the autism community, particularly with my blog, I’ve gained a little extra attention simply for the fact that I’m a father. I knew, going in, that fathers speaking out was a rarity but I really had no idea just how rare. And while I enjoyed being given a little extra oomph to my voice by people willing to help get fathers heard a little more, I also kind of felt that I shouldn’t be taking it because… well, it’s really not fair. My voice was new, not yet established and even I wasn’t sure if I should be reaching a wider audience yet.

Still, as the years passed, I did get to meet some other fathers and I did get some more extra attention by those who were eager to hear from a dad for a change and started to feel more comfortable in my role… the autism father.

I was getting emails from other dads telling me how nice it is to hear that they’re not alone. Some of them even started blogs of their own. I was getting comments from moms telling me that they passed on something I wrote to their husbands and that they really liked it.

But this year… this year really takes the cake.

And I’m going to write now, a lot about me, but it’s not to gloat. Honest. It’s just that mine is the only perspective I have and don’t follow all of the mentions/articles/features that other dads have. But I will still highlight a few that I did notice.

Anyway, skip passed this next section if you want to get straight to the point because I am trying to make a point here.

A Father’s Point of View 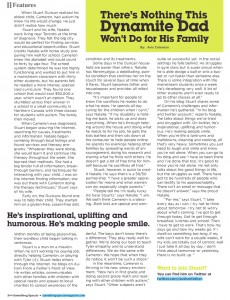 This year, months ahead of time, I was contacted by Something Special Magazine because they wanted to feature a few “Dynomite Dads” for their June issue. It’s a magazine that distributes in only a few states but it’s growing and doing well and to be honest, for a guy sitting at home in a 10×10 room with no windows while my kids are playing, being in a print magazine is pretty awesome.

You can read the whole issue here or click on the thumb to the right to read the page that was about me.

A little closer to Father’s Day, I was contacted by Your Beautiful Child to be the guest featured father for Father’s Day morning. What an honour! And it really was a great show too, I think. Although the hour went by far too fast.

You can listen to my interview here.

On Father’s Day itself, I got mentions from fellow bloggers such as from Lou at Lou’s Land and also from resource sites including:

I even had a blog post of my own that was shared about quite a bit and another blog post of mine featured over at http://SpecialHappens.com as well.

The rise of the fathers

The point is, which I alluded to earlier, is that father’s are getting noticed and being heard. It’s not that no one would listen before but that we just never tried. Well, ok, some did but not enough. Not nearly enough. There’s still not enough but this proves that more and more dads are getting out there and speaking up.

This proves that more and more people like what we’re saying and want to hear more.

So yes, I shared mostly links to what I had going on but many of those links include more links to other fathers and to other resources with more fathers. Check them out!

Go find those dads… you might not agree with some, that’s to be expected. But some of them may have some very fresh perspectives which may really grab your attention.

And if you’re a dad and you see all these other dads out there, jump right in! Start your own blog, start commenting on other’s blogs, start up a Twitter account.. what ever.

Just, let us hear you. I’ve already proved that people want to.

If you’re still not convinced, check out this video from ABC where they talked to Lou from Lou’s Land… a father.

For more incentive, check out these other great dads:

Yeah, I’m pretty thrilled with the attention I got this Father’s Day. How can I not be? Still, the best part of the day wasn’t all the hoopla at all.

The day started with an email from a man in Florida who simply said that he read my story and now, no longer feels alone.

I can’t even begin to describe to you how great that feels. What a brilliant way to start the day!

Father’s Day is over now, but there’s a whole year to find more dads that are willing to speak up, to give more dads the attention they deserve and to make next Father’s Day even better.

It’s very exciting to me. I’ve seen so much change in so very little time.

Clinical Trials – Where are they? How do I get involved?

Have you ever wondered how those clinical trials come to be? Where they are? How you can get involved?

Ya, me neither. But now that you are wondering, I have found the man that has the answer to these questions.

Mr. Sarkis Dallakian is the father of two and has come up with a way to give you these answers on an on going basis. What he has built is nothing short of genius, merging Google’s Maps technology with the clinicaltrials database giving you a visual and searchable dynamic map of your area with information on who is doing it, why they’re doing it and how you can be involved.

ClisMap is not just the best tool, but the only tool that I know of on the net to get detailed, easy to understand information on clinical trials anywhere in the world. Not only is it feature rich (allowing you search by many categories), it is easy to add it to your own site allowing you and your visitors access to this information as well.

Yesterday, I had pleasure of talking to Mr. Dallakian, I thought I’d share some of that with you here. Below the interview is an example of the ClisMap integrated right into this site, specifically targeting Autism trials!

I’m a research programmer and web developer. I work at The Scripps Research Institute, in La Jolla, California, which is one of the world’s largest, private, non-profit research biomedical research institution. http://www.scripps.edu

2. Do you have children with special needs? Can you tell us about them?

We have two kids, my son is 5 years old and my daughter is 7. We had no special problem with our daughter. However, with our son, we noticed that he was having problems with speech when he turned 2. We were very afraid that he might have Autism spectrum disorders and that our worst nightmares might realize. We were fortunate enough to meet another couple who went through the same troubles. Long story short, my son is now doing good after we spend countless hours paying special attention to him. Now he goes to kindergarten and he is doing fine.

3. How did you come up with the idea for ClisMap?

In 2008 Google introduced Google App Engine (http://code.google.com/appengine) and I started experimenting with that. I started building websites and learned web development skills. I was also watching many NIH webcasts (http://videocast.nih.gov/PastEvents.asp), in my spare time, and learning about different Clinical Trials. I also visited http://clinicaltrials.gov to see what kind of information is available there. This website is a great resource that many clinicians are using to find information about Clinical Trials. It has advanced search options including location based search. However, there was no options to search for clinical trials near specific location, similar to the one we use on Google maps. In general, clinicaltrials.gov is oriented more towards clinical investigators rather than patients. I started searching for a site that would let me find Clinical Trials based on my location. I wasn’t able to find one after searching hours on Google. That’s why I decided to create ClisMap as it’s useful for both me and the community.

4. How often is ClisMap updated? Where does it get it’s information?

ClisMap updates its database daily. It takes this information from http://clinicaltrials.gov RSS feed and stores it on Google App Engine.

5. How can people best use ClisMap? How do you get the most out of it?

6. What other projects do you have?

I also run a website called Food Prints (http://food-prints.appspot.com). This was my first Google App Engine project and it has been one of the top 5 projects featured in Google App Engine Gallery for 3 years in a row.

7. Do you have anything else that you’re working on?

I’m now spending most of my free time (besides family and G+) working on Heritage Health Prize Competition which offers a US $3 million Grand Prize. I’m not expecting to win this prize but rather learn new things from best data mining and machine learning specialists around the world.

Once again, thank you Mr. Dallakian… and now, here is an example of his ClisMap in action:
(If it doesn’t show up the first time, just reload the page. This isn’t a Clismap issue, it’s a wordpress+iframe issue.)