By the title, you’d probably be expecting a post on how some children with autism struggle to sleep through the night or what techniques people use to get more consistent sleeping patterns… actually, this post isn’t about that.

Actually, what I do want to write about is something a bit unexpected, not a huge surprise but certainly wonderful. See, if you were to check in on my boys right now (at night), you’d see that they’re both crammed into one single little bed, asleep together.

My boys have always slept in the dark, in the quiet and on their own. We’ve never used night lights or anything and so they’ve never had any issues with needs or fears. They just go to bed at bed time and that’s that.

However, recently, my little one (Tyler, 4) has been asking that he have someone sleep with him. Usually me but sometimes my wife. It’s not because he’s scared… he just wants us with him.

Now, these are small beds… I don’t fit in one when I’m by myself, much less with a child beside me.

So there has been a couple of times that I’ve laid with him, usually I can’t because I have other things to do and then some other times I just won’t because I don’t want him becoming dependent on that sort of thing happening every night. 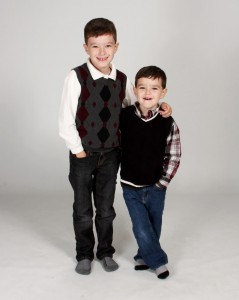 This is where his big brother, Cameron (6 with autism) comes in.

The other night, I went to check on them and they were both crammed into Tyler’s bed. It wasn’t pretty. Neither one of them stays still for long in their sleep.

The next day, I asked him why he was in Tyler’s bed and he said “I just wanted to make Tyler happy.”

Now, there are strange rumours and beliefs by some people that people with autism, especially children, lack empathy. Meaning that they can’t understand how others feels, don’t identify with them and most absurdly… don’t care. This is obviously not true. I mean, not always… there certainly can be times that they won’t understand or even care, just like anyone, but when you add it all up, it’s not true that autistics are completely incapable of it.

This was certainly a great testament to that… Cameron, wanting to make his little brother happy, got out of bed and climbed in with Tyler so that he could have someone to sleep with.

They don’t do it often, thankfully, but when Tyler is really upset about it, Cameron goes on over and hops into Tyler’s bed. How can I get upset about that?