Understanding and acceptance means listening, even if you disagree

Understanding
Adjective: Sympathetically aware of other people’s feelings; tolerant and forgiving: “people expect us to be understanding”.

I started the Facebook fan page called “Autism Understanding and Acceptance” a while ago with the goal of moving beyond awareness. What this means is that, rather than just simply knowing that autism exists, we must begin to do one simple, but very difficult thing… listen.

We must listen to autistics, parents of autistics, “experts” and even those that we might not want to listen to… the bullies, the disbelievers, the critics… the haters.

And this is quite contrary to what we’ve always been told and have always believed. We’re supposed to ignore the haters. Ignore the ones who’s only goal is to make you angry.

I hope to explain why, at least in my opinion, it’s important to listen. 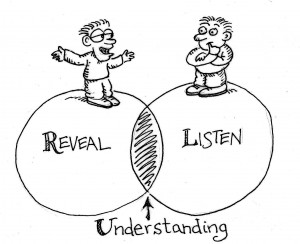 The misconception of what it is to understand

First of all, there seems to be this big misconception among some people that tend to believe that “understanding” is something that applies to others who believe the same thing that they do.

The thing that makes “understanding” so difficult is that it requires us to be willing to listen and understand the position of someone that we do not agree with.

We don’t have to agree with them, just listen. Perhaps, through civility, there can emerge a mutual understanding of how each person has come to believe what they believe… even if, in the end, they still do not agree with each other.

For example, this whole post… I am trying to explain how I’ve come to believe that it’s important to listen to the critics and haters while you (the reader) may think that they should be ignored. When you finish reading this post, you may still not agree with me. But you may understand why I think the way I think.

In fact, I could argue that, to be truly understanding, one should seek out people that they disagree with, if only to listen to them.

It is not your job to change their mind. Nor is it really your job to listen. But it is best to recognize that they are two entirely different things. You can listen without having to convince them how wrong they are.

Understanding isn’t something that happens when two people agree. It’s the ability to comprehend why a person feels the way they do.

The uncomfortable position it puts you in

I won’t lie to you, you’ll get stuck in the middle of some sticky situations… and I’d like to give you my fan page as an example, particularly how it relates to the autism community.

This is such a small part of what it truly is to be understanding. It’s so much more than that.

It’s about understanding why a person might want a cure. What they’ve been through.

It’s about understanding why some people dislike autism, or any disorder or disease or their hair colour or how tall they are or their dripping kitchen faucet. Anything and everything.

“Understanding” is not a thing that is to be thrust on someone that dislikes something until they learn to like it.

This means that, on my Facebook page, when I post something by someone who feels sad, angry, betrayed…. just… dark… it is I that comes under attack for it. Not the person that wrote it.

It also means that when I post something triumphant, positive, happy…  it is I that comes under attack for it. Not the person that wrote it.

Why? Because people have perceived notions of what “understanding” is and feel that I should share those notions. That by being “understanding” of their feelings… I should also have those same feelings… and only share things on the page which coincide with those feelings.

It puts me in the middle. And unless I share items with people that they are personally comfortable with, they will see me as not being understanding….  for they would not have shared it… because they do not understand it.

But no one single feeling will pertain to everyone. Which means there will always be someone that does not “understand” it.

Acceptance for the win

Perhaps I can win though… not in a victory, holding up the trophy sense of the word… but by persevering.

You see, understanding and acceptance is not the opposite of wanting a cure for autism.

They are people, with valid opinions, feelings… lives.

And it’s true, they might be wrong. We tell ourselves there’s no reason to listen to someone that is wrong.

But how can we ever show them what is right if we can not take the time to understand why they are wrong or how they came to be wrong?

Besides, right and wrong is such an abstract concept much of the time anyway. Differences, sometimes, are simply that. Differences. No right or wrong.

If acceptance is all you ask of others, then you have to be willing to do the same. Of all others. Not just those you feel comfortable with. Not just those that share your feelings.

Take the time to understand those that you disagree with completely… before you ask someone else to do the same.

It’s a spectrum of different stories ranging from one end to the other and only those who take the time to listen will be able to truly understand it.

It’s people. Autistic or not. Happy or not. Angry or not. They’re all people.

That doesn’t mean that we can’t take the time to understand them. All we have to do is listen.

That’s what understanding and acceptance is.

Perhaps you disagree. And that’s ok. At least now you understand what it is to me.

5 Responses to Understanding and acceptance means listening, even if you disagree