We ask to not be judged and yet…

When I started the project ‘Autism Understanding and Acceptance’, I did it with the intentions of helping those without Autistic children to better understand and accept people with Autism as well as the parents that do have children with Autism.

I knew though, that it also meant doing the same for parents that do have Autistic children. Far too often I’ve seen parents disagree, quite vocally and with much anger, where one has a child with Aspergers or “high functioning” Autism and the other has a child that is far lower on the spectrum, much more severe (nonverbal, not toilet trained, etc.).

This morning, I saw this news story where a woman abandoned her 10 year old, severely Autistic son to a hospital. He was just left there to wander the halls. When they found him and talked to her, it turned out that she was bi-polar, unemployed, has 2 other children, going through a divorce and being evicted.

Along with the story were a lot of comments, including extra comments from those who posted it on Facebook and so forth. Some were with some level of understanding while most were very judging…. some were even full of a lot of hate.

So I copied the link and shared it in a couple of places, asking what people thought… and one such place was my Autism Understanding and Acceptance fan page. I picked this place in particular for a reason.

The authorities press no charges, her peers do

In the article, it states that the authorities are not pressing charges. They are instead, focusing on the child and making sure that he gets the help and care he needs.

Parents on the other hand, not all, were pretty quick to pass judgment. Many stating “you just dont leave your kids” and “our kids aren’t throw-aways”.

How quick we are to judge 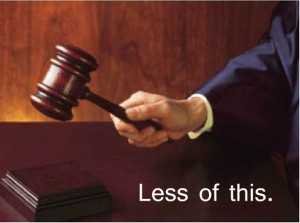 The article tries to paint the picture with a quick list, as I did above (eviction, divorce, unemployed, etc) but that only gives us an idea.

The fact is that we don’t know how hard it really was for her, we don’t know for how long she struggled with this decision, who she talked to about it, what advice she was given, what her other choices were (or weren’t).

For that matter we don’t know what other assistance she tried to receive. Did she exhaust all of her financial options (there’s not always a lot of support from the government if you’re unemployed), did she exhaust all the options her local charities/groups could afford her? Did she get turned away from medical facilities for having no insurance or even for having her own disorder (bi-polar) to contend with?

We all know how hard it can be to get proper services and yet we’re quick to suggest that it would have been so simple for her to have the resources handed to her to avoid her having to resort to abandonment.

When you’ve met one child with Autism….

Another truth is, we don’t know just how hard it really was. I know it’s hard raising my 2 boys, one with Autism (not severe) and one without. This woman had 3 children… and one had severe Autism.

And in our minds, we can picture that… but some small part must also be saying “I don’t really know because I’ve never met him.” The reason for this is that it’s exactly what we tell teachers, doctors, professionals, other parents and everyone else when they tell you “I know what it’s like”…  no, they don’t, because each child is different.

Furthermore, each parent is different. Some people simply aren’t good parents. Some people are really NOT good with special needs children. Not everyone has the same patience, tolerance, understanding, stress, anxiety and coping levels that we might have.

Would I have been able to do better than her? Would I still be caring for that little boy? I’d like to think I could but you know what, I can’t say that. I can’t possibly know.

It’s not exactly hypocritical but it’s pretty close, to judge this woman harshly and then ask others not to judge us.

When my son hits the floor at the grocery store, kicking and screaming, I deal as best I can but most likely I’m just paying the cashier to get us out of there. Other parents judge me. I can see it, I can hear it, I can feel it. And I hate it.

I make a very conscious and concerted effort to not judge others in the same way. When I see a screaming child, I look at the parent and smile. They know I’m thinking “It’s ok.. don’t worry about it.”

This situation is far more extreme but it’s no less different. We can not ask for others not to judge us all the while quickly, and vocally, judging another parent at the first media story we read of her.

Media stories seldom tell the whole story, media stories rarely are as accurate as they should be. But even still, from this media I can take a few points:

I would never give up my children but it doesn’t take a lot of television watching to realize that not everyone is parenthood material. Not everyone that has children should have children. And many of those people recognize that. It might not be right, but I can respect that. If they’re willing to do their best, and fail, and admit that they can’t do it.. I’d rather they gave up that child.

Adoption agencies are there for a reason. You can judge a person for giving up their child but for some people, they just have to. They aren’t you. The child may very well be better off with someone else than with a parent that only pretends to be a good parent… someone that may end up hating that child enough to do harm.

A person that snaps is a dangerous person. People can be pushed over the edge and that edge isn’t the same distance for everyone.

As part of understanding and acceptance, I recognize that not everyone can raise a special needs child. Not everyone can live through the same stresses that I can. Not everyone has it as easy or as hard as I do. And no one… not one person, is the same as me or my child.

Maybe I don’t always understand and maybe I can’t always accept… but that doesn’t give me the right to judge.

Understanding and Acceptance isn’t reserved for those without special needs children. I think we all could do with a little more of it.

16 Responses to We ask to not be judged and yet…