The complications of having delayed sensory overload problems

I have a bit of a booming voice, it can get loud… so when my dog is particularly bad or my boys stop listening and I raise my voice… it gets attention. I’m not yelling or screaming out of control by any means, it’s just… raising my voice is… loud.

The problem with this is that my son Cameron is especially affected… since a sudden loud voice like that can send him running to hide under some blankets.

At least when that happens though, it’s instant. I’m done, he’s done… we go about our day. No worries.

The real issues come into play when it’s not done and over in an instant.

A positive is a negative

Cameron shows some pretty amazing resilience sometimes when it comes to being able to handle himself. Yesterday was a perfect example of this.

My boys were invited to a birthday party at an indoor playground where kids were free to just go anywhere and do anything. There were games all around, flashing lights and a huge network of netting and tubes to climb and go through. 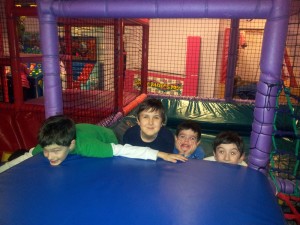 Cameron is in green

When we arrived the place was full which meant the entire place was just a wall of noise. An occasional crying child somewhere in the distance, lots of screaming and a bit of laughing mixed in.

Cameron and his little brother jumped right in and played just as any child should… it was quite nice to see. They had a lot of fun.

But I knew, I just knew that this was going to be too much. It was too much for me and I wasn’t right in the middle of it.

See, Cameron won’t just have a meltdown right in the middle of the place… instead, he’ll store all that pent up energy until he’s back home where he feels safe.

So, even though he can have a great time and handle himself quite well for quite some time… it comes with a price.

At first, this presented quite the challenge for us as parents as we’d have to figure out why our little guy was completely out of control for a day or two. To us, it would seem completely random that he’d just be really moody, extremely hyper and very much unwilling to listen to us or do the things we asked of him.

But it wasn’t random. It was actually very much a cause and effect situation (which most things are), where the effect was hyperactivity, irritability and lack of control… and the cause was over stimulation that no one had noticed.

What would happen is that my son would go to school and they’d have an assembly, or go on a field trip, or a party like the one I just described… something somewhere would happen and even though my son had a wonderful time and everyone thought he was just the most perfect little boy… there was actually a time bomb building up pressure, waiting to get home.

The biggest thing is, it’s entirely up to us as parents to solve that sort of thing too because no one else will ever see it. They only see the boy that holds it all together during the day.

Over time, I’ve come to recognize the clues though. For example, at that birthday party, when it came time for everyone to sit and have cake, all of the kids were excited.. but only Cameron bounced in his seat. Literally.

Something he just has to do for himself

This is one of those cases where, we as parents, could decide to just not go to those places so that we don’t have to deal with the after effects but that’s not very fair to him. He loves going to those places and doing those things.

We could read every book we have and talk to every professional we can find and try to set up systems and procedures to deal with the after effects at home in a constructive way.

And to be honest, I think he’s starting to get it. When he gets home, he’s still moody and hyper but he’s learning to take time for himself to go off and make believe something on his own. His little brother gets mad sometimes that he can’t go be with his brother but it’s obvious that it has to be that way.

When he’s given his space and allowed to get that energy out through pretending his favorite video games, pokemon or bey blade battles… what ever it is he needs to envision… it works for him. At least usually.

It’s been hard for us to figure out and to deal with… I’m sure it’s been even harder for him… and we’ll always get people asking questions about it as it’s not quite ‘normal’… even by autism standards… but it is what it is and it works for us.

← Autism: Front and Center
Changes On The Horizon →

3 Responses to The complications of having delayed sensory overload problems