What if I fail even just one time – on Minecraft, autism, bullying and suicide

I wrote recently, a plea to the Minecraft community from the autism community for help on April 2nd because I had received not one but two messages from children that were ready to take that final action, suicide. They’re both great kids but their lives are plagued by bullies. It affected me, I became emotional and that post was the result. 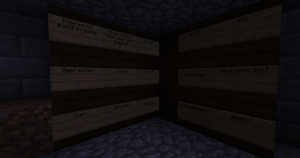 Monday morning, the start of a brand new week and first thing in the morning, another child was on the server, demolishing his buildings, giving away all his belongings and talking of committing suicide. The difference this time being that he refused to talk to me in private. 3 hours of talking to him and working with him and eventually he was building again and feeling better again… and it was all made public for the whole server to see.

On average, using my best math and recollection, I’ve had a conversation like this with a child at least once a week since I started the server just about 9 months ago. This is the first time that it’s been in front of everyone.

Perhaps it’s because it was public that, for the first time, I started to ask myself, what if I fail? Even just one time… what if I can’t help? Maybe I already have and just never got word about it. But what if I do fail and I do get an email. What then? What will I feel? How will I react? What will I do?

I’ll be honest, a million answers run through my mind and the majority of them are not good. But I feel that I can’t honestly even pretend to know. If 2 great kids coming to me in one week can catch me off guard the way it did, then getting such terrible news could only be worse, right?

The more I think about it though, the more I realize that there’s only two things I know for certain.

1. In 9 months, 3700 people with autism have joined my server. 3700 children that are bullied on every other server they try. There should not be 3700 in total much less that many in 9 months. And my server has only been spread by word of mouth. These numbers should be alarming to you.

2. I am going to fail eventually. Even the best, most well trained professionals can’t save every person that has reached that level of desperation. Me? Well, I’m not trained and I’m certainly not a professional. The law of averages is working against me in this case as the reality of it is, I can only keep doing this for so long before I find myself facing down a parent’s last email to me.

I can’t even begin to tell you how terrifying that is to me.

It’s time to get proactive.

Instead of sitting back and waiting for that to happen I’m going to try my best to motivate enough people into taking action on this.

What I need is to reach as many Minecraft players as I can. Whether you make videos, live stream or just play on servers with others to please speak up on April 2nd, Autism Awareness Day and tell the world that you are taking a stand against bullying.

Then, every day after, when you see someone being treated unfairly, rudely, brutally or in any other manner that resembles a form of bullying, don’t just turn away… please, say something.

Let those bullies know that you are not ok with how they are treating others and that it’s not going to be tolerated any more.

Don’t just do this because it’s the nice thing to do and certainly don’t do it as a favor to me… do it for those children that should never even be thinking these terrible thoughts much less ending their own lives before they ever had a chance to really truly live them.

Bullying doesn’t just target autistics, that’s true, but autistics get it far worse. As we all know, bullies prey on those that are different somehow and being different pretty much defines the autistic experience. This is why this is my focus and this is why I encourage you to speak out collectively on Autism Awareness Day but the truth is that this is for everyone that has ever been bullied everywhere.

By doing this, by speaking up even just one time, you could be saving someone’s life. All they need to know is that someone cares and that there’s more to life than just the bullies.

← Destroying the term “special needs”
This is what happens when the Minecraft community accepts the challenge – autism, bullying →

9 Responses to What if I fail even just one time – on Minecraft, autism, bullying and suicide