Deconstructing the self-righteous – when parents try to kill their children 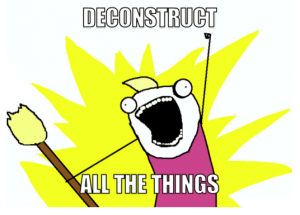 I keep seeing some disturbing responses to the Kelli Stapleton case and I thought I’d address a couple of them today… a sort of, let’s clear the air, type of post.

Without wasting too much time, let’s get right into it.

In a recent statement from ASAN (Autistic Self Advocacy Network), they condemned Dr. Phil’s interviews with Kelli Stapleton stating “We see a pattern of copycat crimes whenever there is a well-publicized case of a parent murdering, or attempting to murder, their disabled child … Dr. Phil had an opportunity to shut down this cycle of violence, and instead he chose to perpetuate it, as loudly and widely as possible.”

I have long seen many people get adamantly upset any time anything to do with autism is portrayed negatively in the media. Whether it’s adults that still behave as children, needing parenting for life or children behaving violently, no matter the situation, if it “makes us look bad”, the media is the bad guy.

I wonder though, where were these people when mothers were murdering their children that didn’t have autism? How come no one screamed about the risk of copycat crimes when these mothers killed their children?

I don’t know if you noticed or not but those stories are from 2014 alone and that’s not nearly all of them. Where’s the outrage? Why is there no one calling for the end of the journalists that reported these stories?

In our efforts to protect children with autism, do we now not care about any child that doesn’t?

There are more of these murders every year than there are months on the calendar but one murder attempt on a child with autism in the last year and suddenly we fear copycat crimes? No, we fear our own public image being damaged, nothing more.

The truth is that media attention is good. Whether your stance is that there should be more services (this will convince people of that) or if your stance is that she’s a monster for trying to kill her child (this will convince people of that too), media attention is not what leads to another tragedy like this, doing nothing is.

We must focus on figuring out how to prevent all of these stories from ever happening again. And crossing our fingers and hoping that no one becomes a copycat is simply not going to do it.

How can anyone sit there, in their big self righteous chair, and claim that a “copycat crime” is our biggest concern? How can anyone honestly sit there and try to tell me that the last mother to attempt to murder their own child did it only because they saw someone else do it on the news and thought “hey, I can do that!”

Copycat crimes are not what this is about. It never was.

Which leads me to…

I keep hearing this and as a statement on it’s own, I agree. However, this statement is a precursor to the rest of the intended message which is “now is not the time to discuss a lack of services or support or funding.”

I have one simple question then, when is the right time? During the lull between the last attempted murder and the next one? Or after the next one? Or the one after that? Do we look around and go “What? Too soon?”

Let me put it another way, if we never get around to discussing how we can lend help to the next parent that is reaching the end of their rope, for what ever reason, are we partially to blame? Well, no, I suppose not since “murder is never OK”, right? We can wash our hands of all blame.

I’ve seen it go even further than that. I’ve witnessed good people be verbally and brutally torn apart for so much as suggesting that they think events could have played out differently if the support had been there. I’ve seen people be accused of the most horrid and vile things simply for suggesting that they have it rough too and understand how someone could reach the point of murder/suicide.

Now, let me be clear, no one ever said they condone it or would ever do it themselves. They only said that they’ve been depressed and felt helpless and felt alone and felt abandoned and they understand what that murderous mother felt. Not that they’d do it too, but that they take the time for understanding… that they have shared a similar experience at least in leading up to the crime.

When a mother (or father) comes to you saying how hard they have it, how difficult their lives are, how no one is there to help, how no one seems to care, how there is no money, how there are no services… and when they say that they understand how hard it must have been for the last mother that was in the news, if you take that as an opportunity to beat that parent down with your words, to bully and chastise, to degrade and humiliate and to dehumanize that parent with all of your might…

You do NOT get to throw your hands in the air and say “don’t blame me, murder is never OK.” No, you are not without guilt here. You are in fact a part of the problem. In fact, you’re worse than the lack of support, you’re the opposite of support. And if that mother that you’re beating on is the next one we read about in a headline, I will never ever forgive you. I will never ever let anyone forget what you had done and I will never ever stop reminding you of exactly who is to blame.

You know what? You’re right, murder is never OK. But that doesn’t mean we forsake our humanity and it certainly doesn’t give you a right to forsake yours.

Yes. A parent that tries to kill their child is a monster. And you’re right, murder is never OK. On that, we’ve never disagreed. It’s what comes next that you need to figure out with the rest of us.

Now, either learn to start helping people that need help or get the hell out of the way of the people that will.