Dear news media, this is how you fail the autism community so badly

The autism community’s biggest enemy, by far, is the news media. How so? Well, first of all they report the “terror” of autism, the “suffering” of autism. Secondly, they take any report that says “We put X and Y in a room together and found a Z% correlation” and create sensationally outrageous headlines such as “Z is caused by X!!!! Your children are doomed!!”

To give you two prime examples of how the news media agencies fail us, we only need look at what is happening this week.

This article names all sorts of serial killers that you either hate or will hate after reading about them, names like Adam Lanza, Seung Hui Cho, Jared Loughner and Jeffrey Dahmer. Having just come off the headline of “significant statistical link between mass murder and autism”… can’t you just feel that emotion taking over?

Oh wait, we skipped this one minor paragraph tucked away in the middle somewhere that has little importance… it’s this one:

The researchers stressed the study is “clearly limited” by the “anecdotal and speculative” nature of some of the published accounts. Lead researcher Clare Allely, of the University of Glasgow, emphasized the study did not suggest those with autism or Asperger’s are more likely to commit murder. “We’re not saying people with autism will be serial killers,” Allely said, adding “it’s way too early to make any statement like that.”

Hey wait, that does seem important, doesn’t it?

To me, a more appropriate headline would have been “Anecdotal and speculative information researched on autism and mass murder finds it’s way too early to say people with autism will be serial killers”.

Well, maybe not, it’s a little long and granted, it doesn’t pull in the readership that “significant link!!!” will.

This week, one person with autism plans a murder and suddenly we’re having studies about there being a potential link? Where are the studies that say “hey, 165,000 murders were by people that had no disorder. Could be a significant link!”?

This second bit of news also bothers me on another level.

In this article, they write

“Schifman said Rodger was diagnosed as being a high-functioning patient with Asperger syndrome and had faced bullying through much of his life as he had trouble making friends.”

Now, I talk to autistic children every single day and at least 2-5 of them each week that feel like committing suicide due to the amount of bullying they are subjected to.

There are literally hundreds of autistic children dying each year due to bullying.

Why?!!? Why are there 100’s of children committing suicide due to bullying each year and no one cares?

But 1 child plans to commit murder due to bullying and suddenly this is national coverage? And autism is a big part of the story?

This is heartless and devastating to those of us with autism, those of us in the autism community and to your audience in general. 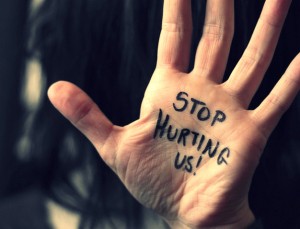 You Are Hurting Us

Listen, I understand that you need to get enough ratings, you need enough of an audience to “rate” against your competition. But please stop!!

I am begging you, I’m am pleading with you and I am insisting that you stop making autism out to the bad guy.

We are children, adults, parents, friends, neighbors… we are your brothers and sisters.

You need to understand, you are hurting us. You are causing the suffering that you report about by reporting the way you do. You have become the bullies and you are bullying us.

Stop the sensationalist headlines. Stop burying important facts. Stop singling us out of a crowd of thousands and saying we all must be like that one in the crowd. Stop making us that thing to be feared.

If you can’t find it in your hearts to start helping us, at least, please, stop hurting us.

17 Responses to Dear news media, this is how you fail the autism community so badly