Trading in my sanity

On the day I received my Aspergers diagnosis from the doctor, I was scheduled for appointments with a counselor and a psychiatrist. On the same day that my entire 35+ years finally started to make sense to me, I was put on the list to be fixed.

No one even asked me if I was broken.

The gate keepers for what is normal

It occurred to me that psychiatrists (and psychologists) have become the gate keepers of what society considers to be normal. They write up manuals with definitions of what is not normal and if you fit within those definitions… you’re diagnosed with something.

They’re also the people you talk to over and over again, sometimes for the rest of your life, in the epic quest to figure out how to make yourself normal. And you never will be normal until they tell you that you are.

Which brings me to my son Cameron. He’ll never be normal. He has PDD-NOS (which, next year, will no longer be called that and will simply be “Autism Spectrum Disorder”) and you have that for life. Because it’s one of the many definitions found in the psychiatrists manuals, he will always fit into that definition and thus be told that he’s not normal.

My son has a long life ahead of him with some of the most difficult years yet to come, high school.

The truly ironic part of high school is that when he gets bullied (I say when because the odds are, unfortunately, pretty good), he will be sent to a counsellor or a psychiatrist to help him cope with the anxiety, the depression and the feeling of being an outcast.

The bully? He’ll probably be punished in some form, like a detention or suspension but then will go right back to his bullying ways. Why?

Because bullying is normal.

Yeah, I said it. Bullies, while many are doing great work in trying to stop bullying, are still very much a fact of life. Especially in high school. When ours kids go off to high school, they know just as much as we do that there will be bullies there. Our kids just have to get through it.

How has society gotten to the point where the bully is normal and the autistic kid that’s bullied is the one that needs fixing because he’s not normal?

It gets even worse as we get older. For example, here I am, getting my diagnosis and “fix me” appointments all the while other people I know have, what I consider to be, real issues. I won’t go into specifics but there are people I know that could use some help.

But they’re normal. They don’t have a diagnosis for anything. They just have issues. And everyone has issues, to some degree.

So they would never have someone booking appointments for them like I did. 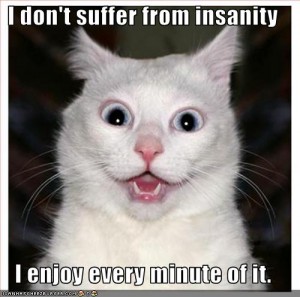 Today’s world sees the word “insane” as meaning totally bonkers, crazy or all sorts of not making sense. The truth is, the definition actually is “In a state of mind that prevents normal perception, behavior, or social interaction.”

Granted, autism is far more than just “a state of mind” but still, you get the same effect. One could argue that something that “prevents” me from being “normal” classifies me as insane.

Which makes me think of an old movie I once watched. The movie itself isn’t very memorable to me but one line in it really stuck with me.

Sane and insane could easily switch places. If the insane were to become the majority, you would find ourself locked in a padded cell wondering what happened to the world.

It always intrigued me, even sort of made me smile. Because it’s quite the interesting notion to think that “normal” is really just what the majority of people are doing.

There’ll likely never be more autistic people than non-autistic people in the world but at 1 in 88 being the most recent numbers out of the US, it still makes me think; if more people had autism, would being autistic be considered normal?

That makes me smile.

I’ll go see the counselor and the psychiatrist. My son will likely have to some day as well. And we’ll do our best to be the best that we can be.

But insanity is only a 51% majority away from being considered sanity.

Normal is just a number away.

You can keep it

And now that my life makes more sense, I love who I am too.

Since getting the diagnosis, I feel like I traded in my sanity. I was instantly put onto the “not normal” radar and had appointments made for me.

But I realize now that having autism doesn’t make you abnormal. It just makes you a different kind of normal. A kind of normal that could easily switch places, if the numbers were right.

If normal means changing my son into someone he’s not, you can keep it.

7 Responses to Trading in my sanity