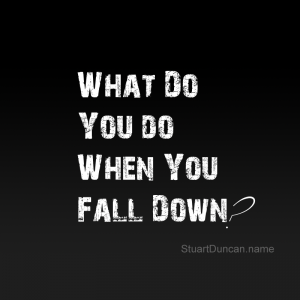 Recently life has been, we shall say, unkind. People who would steal from me, people that would try to hurt me, stresses greater than any I’ve felt before, illness and immense pressure. I find myself in the greatest financial burden that I’ve ever been in all the while outside forces conspire to make it even worse for me.

To say it’s been rough would be the greatest of understatements.

Late one night, unable to sleep, I found myself reading back through some of my old writings when I happened upon a question. A question that I used to ask my son every single day of his life. I remembered how he would sometimes answer in a frustrated tone, as if this was starting to become an annoyance for him. But I continued to ask him. It was important. I needed this question to be a part of his very core. Always.

I had forgotten about it. How did I forget? When did I stop asking? How did this happen? How long has it been since I asked him? I don’t know.

“What do you do when you fall down?” He’d answer “You get back up.”

I found this in my writings because one time, just once, his answer was different. He said “You get back up. You never give up.” I wrote about that. It was the first time that he included that second part, to show me that he really got it. He knew that I didn’t mean to literally fall down. He knew the wider scope. He knew.

But I stopped. I forgot. I didn’t even notice.

But I stopped. I forgot.

I realize now that I wasn’t just telling him to remind him. I was the one that needed reminding. And I stopped. I forgot.

What do you do when you fall down?

You get back up.

Thanks for reminding me son.

fall down, never give up, reminder