Labels – Try as we might, we can’t avoid them

I know some people that purposely don’t seek out an autism diagnosis (or any medical diagnosis) for fear of the label that it will attach to themself or their child… a label that they will have to carry for life.

While I could go into quite the long winded argument about all of the ways that a diagnosis would help far more than it could ever hinder… instead, I’d like to focus on the label itself.

Anyone that has ever attended high school knows that you simply can not avoid getting some type of label in life. It doesn’t matter who you are or what you do. Even the popular jocks get labels. See? They’re jocks!

They say that if you’re bisexual, you’re confused. If you’re gay, it’s a sin. If you’re fat, you look disgusting. If you’re dressed up, you’re conceited. If you dress for comfort, you’re a slob. If you speak you’re mind, you’re egotistical. If you don’t say anything, you’re rude. If you are nice to strangers, then you’re fake. If you cry, you’re a drama queen. If a female has male friends, she’s a whore. If a male has female friends, he’s a player. If you’re smart, you’re a nerd.

I could go on and on but essentially, the idea is, it doesn’t matter how big, small, tall, short, popular, unpopular, loud, quiet or anything else that you could possibly be… you’re going to get labelled.

It’s just how it goes. 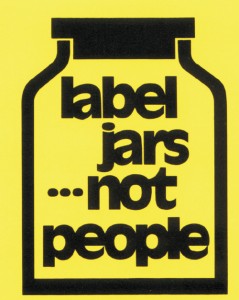 Judging a package by it’s label

The problem, I think, isn’t so much the label that we are given so much as the assumptions that are made based on that label.

For example.. if you see a woman with a lot of make up, physically fit, very tight and revealing clothing… many people would say “she’s a slut” and with one little word/thought, they assume they know her entire life story.

It becomes an even bigger problem when the label precedes you.  For example, going back to the high school reference, word travels fast so if you are really smart… people may start calling you a nerd, geek, poindexter… what ever they think will hurt most.. before they’ve even met you.

They can’t possibly know if you’re smart just by seeing you enter a room or walk down the hall but because friends talk to friends… people have already placed a label on you and prepared an entire method of dealing with you before having actually seen you.

This is a very shallow way of living, it’s not fair and it’s very close minded… but we all do it. At least to some extent. When we hear about another parent who behaves one way or another, talks a certain way, believes a certain thing… we’ve already made assumptions and possibly even decided if we’ll like them or not before we ever say hello.

Nicknames are just labels that we approve of

Sometimes, when we get a label based on the way we actually are… as given to us by friends… we don’t mind them. Sometimes they even evolve into nicknames that we live with for many years.

But they’re not so bad because they’re not based on assumption, they’re based on our actual personalities or quirks. Sometimes we still don’t like them but sometimes we don’t mind.

Labels associated with special needs are very rarely welcome ones because they are almost always based on assumptions, misinformation and stereotypes.

When someone uses the r-word in association with autism, I take that very personally because neither myself nor my son fit that definition. No autistics do unless they also have a separate diagnosis for exactly that.

See, if you were to call my son very particular or picky… I’d probably chuckle and agree with you.

But it’s one based on getting to know him and what he’s like.

Not all autistics are all that picky. Take me for example. I’m very go with the flow, not caring too much what others want to do as I can do it too, I eat just about anything… my son is the total opposite.

Labels don’t always hurt. Sometimes they are born of familiarity and if welcome by the individual… are acceptable.

One on one, when accepted, labels are ok.

Never any other time.

When made by a group, against a group, based on assumption, rumour or “information”… labels are not ok.

I leave you with this… from the man who played the ninth doctor in Dr. Who.

← This one is for the moms
Musician makes connection with 8 year old, blind, autistic boy named Jacob →

2 Responses to Labels – Try as we might, we can’t avoid them