A wish for his autistic brother 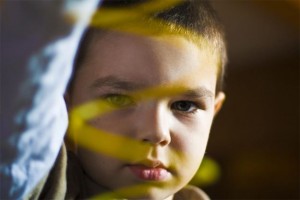 I would like to introduce you to Tyler. He is currently 6 years old and is as smart as he is adorable. He has an amazing sense of humour and is very clever. He’s also very clumsy, often spilling stuff but feels terrible about it and is quick to clean up and make it right with a warm hug.

Recently, a woman asked little Tyler what he would ask for if he had 3 wishes.

Now, you would expect that little boys would want all the candy in the world, or all the toys they could dream of or unlimited video game time. That’s what we want for children to wish for, right? That’s the kind of stuff that should be on the mind of a little boy. That’s the kind of thing that we like to think that all kids have to worry about… how to get more of what they like.

So what was Tyler’s first wish?

Tyler wished that his brother Cameron did not have autism.

This is the reality for siblings of children with autism. Children want their family members to be the best that they can be. Big brothers, moms, dads… they are the real superheros. And to a 6 year old little boy, they shouldn’t have anything wrong with them. And to a 6 year old little boy, who loves his brother so very much… Cameron has something wrong with him. Autism.

In the autism community, if an adult said that, many would be outraged. There’s nothing wrong with Cameron and to want his autism to be gone would be to want Cameron to no longer be Cameron.

For a 6 year old little boy though, who loses time with his brother because he’s off stimming or because they fight because Cameron obsesses too much or lacks the proper communication skills, or because he can feel his own 6 year old intellect slowly surpassing his big brother’s 9 year old intellect… his number one wish in all the world, more than games or candy, is that Cameron didn’t have autism.

What did you wish for when you were 6 years old? Was it for toys? Candy?

I don’t think he realizes it yet but there’s some small part of him that is becoming more and more aware… his big brother is going to depend on him.

As time goes on, I know Tyler will continue to love him and accept him and be happy that his big brother is just the way he is, but I also know that there will always be a 6 year old little boy deep inside him who’s only wish is that his big brother didn’t have autism.

What were his other wishes?

That I would cook dinner faster and that the wall in his bedroom had nothing on it. Phew, still a 6 year old after all 🙂

3 Responses to A wish for his autistic brother