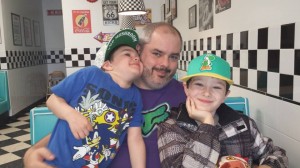 My boys and I

When I started this blog, there were so few blogs from dads. Fewer still from dads that were writing about autism or having an autistic child. I felt honoured to represent the “silent” partners and even felt that I had a responsibility to say yes every time that someone asked if I’d contribute or guest post for other blogs when they tried to feature dads, especially around Father’s Day. And really, with so few dad autism bloggers, how could I say no? It’s not like they had a big list of others to fall back on.

It only took one year to realize that I was in over my head. Not that I had too much demand to write but that I very quickly ran out of things to write about. I felt that I was doing a disservice to those people that requested me if I just rehashed the same message for each of them even if I did phrase it differently.

It hadn’t occurred to me until after I was asked but, I really have no clue what to write about! Do I fall back on traditional stereotypes and write about bread winning and being strong and never sharing emotions and retreating to the man cave and needing a beer in each hand? Do I turn to the one thing that is most commonly written about with dads and autism… running away? Denial? I’m sure that doesn’t represent us very well and certainly doesn’t fit into my list of one responsibility… to represent a father’s point of view.

I had to fall back on my own blog, since it is called “Autism From a Father’s Point of View” after all and see what I could pull from things I had written before. But that wasn’t much help either. I discovered that even though everything was, indeed, from my point a view, as a father, nothing about any of it was distinctly fatherly. Nothing stood out as… you know, ground breaking insight into how it’s different for fathers.

The next year or two, I wrote when asked, but, I just wrote about what ever was on my mind at the time. I had given up on trying so hard to come up with something so focused on fathers. It really was stressful. Not “I might lose my job if I don’t reach this deadline” stressful but certainly enough that it really bothered me.

Why was I struggling with this?

Now, I’ve been to some homes where the traditional stereotypes aren’t traditional stereotypes at all, they’re facts. The dad is very obviously the bread winner and requires a beer and a football game after a hard days work. Now, I know that you may read that and say “Yeah? What’s wrong with that??” and if you do, I apologize. I don’t mean that it’s wrong in anyway. It’s become a stereotype for a reason. It’s how it was and how it still is for some people.

That being said, I’ve also noticed, in some homes, that things have very clearly changed. The mother is working every bit as hard as the father or possibly the only one working and likewise, the father is caring for the children and house every bit as much or may even be the only one… or at least, the majority of it.

I think this is where I begin to struggle because I see this even more so in families that have a child with autism. Especially if both parents are the accepting types. No duty is his or hers, no role is gender based. The father changes just as many diapers, attends the same dance recitals and even throws the footballs every bit as much as the mother does.

I’ve also found many families where there is now a single parent where there once was two… and it’s not always the mother that is pulling double duty now… sometimes it’s the father. Granted, this may not be as frequent as single mothers because there is truly something incredibly remarkable and strong about how mothers can get the job done without any help.  But some fathers are proving to be just as strong and just as remarkable and while I am not happy that it has to be that way, I am incredibly impressed and proud that they can.

Having realized this, having embraced this and as I hope that this trend continues and grows, I have decided that I will happily write and guest post elsewhere if asked but only on matters of parenting or about autism in general but not about fathers for Father’s Day. I am proud of fathers every day. And I love that there’s a special day for fathers just as there is for mothers because they deserve it… now more than ever.

But I can’t write about something that is uniquely one parent or the other as that distinction, I feel, no longer applies. Unless it’s about actual child birth or breastfeeding, neither of which is in my area of expertise, I can’t think of anything that I can tell you about a father that doesn’t also apply to a mother and vice versa.

That may mean less opportunities for me to get my name out there but so be it. It’s a good problem to have. Moms are dads, dads are moms and parents are parents. This applies even more so as gay marriage becomes legal in more and more places. Two women, two men… all parents. I’ll gladly pass up opportunities to write for others for that.

This Father’s Day, the only thing I have to say as a father is kudos to you fathers out there that give me nothing to write about on fathers. The less I have to write about that distinguishes a mother from a father, in my opinion, the better.