This is the problem with acceptance

There is this “place” that people can reach when they have total acceptance. It’s a place of knowing who they are and being fine with it.

It’s called the Acceptance Paradox. You can read more about it here: http://www.creativitypost.com/create/the_acceptance_paradox

An excerpt from it, which explains how it goes:

“Instead of defending yourself against your own self-criticisms. You don’t try to build yourself up or fight back. Instead, you do just the opposite: You simply accept the fact that you are broken, imperfect, and defective. You accept your shortcomings with honesty and inner peace. The surprising result is that you can often gain invulnerability when you make yourself completely vulnerable and defenseless.”

PS, try not to read too much into the “broken, imperfect and defective” parts. This was written about humanity in general, not about autism or any other disorder/disability.

Now, in this article and as it is explained is that you make yourself invincible by no longer caring what anyone says about you.. that you accept you for you, for better or worse and you are completely at peace with that.

What I’ve seen of this though, is not always so peaceful and wonderful.

Acceptance vs Unwillingness to Change

I want to talk about etiquette and manners… one of Temple Grandin’s favorite topics.

“The other thing is, teach these kids manners. I was raised in the ‘50s and ‘60s, and manners were drilled into me. I see kids [on the spectrum] today that have no manners. That’s going to hurt them. You can’t punish a child who is acting out because of sensory overload. But it’s unacceptable to see kids throwing things and slapping people. I see kids with Asperger’s [a mild form of autism] who can’t hold a job because they are constantly late. Teach kids to use an alarm clock. This is common sense and sometimes we forget about common sense. Autism is used too much as an excuse for bad behavior.” ~ Temple Grandin

To give a couple of examples:

During a conversation, sometimes an autistic can seem uncaring or rude due to a straight forward or literal response in a conversation. But autistics, like anyone, can learn to “think before you speak”… it may just be a bigger struggle. But that’s not even required so long as a simple apology is offered should those responses actually offend someone.

I’ve found several instances where, instead of an apology or explanation, the response is more so a dismissal of the other person’s feelings… that the person has to just accept the response as it is perceived (rude and uncaring) because the person who said it is autistic. They’re not allowed to be offended, they must have acceptance.

In this scenario, the autistic has acceptance, in that they may be perceived that way but they don’t care. And acceptance from the person they are conversing with in that they have to just not be offended no matter how rude the response may have seemed.

In this form of Acceptance Paradox, there is no real inner peace to be achieved. One person is offended while the other person thinks they should just get used to it.

An apology or explanation is certainly not always warranted… such as for a meltdown. Imagine a gathering at your house and when things get to be too much, sensory overload takes over and someone blows up, makes a scene and leaves. A short while later, they return and the gathering continues.

Is an apology necessary? Well, it shouldn’t be. If people are accepting, they simply know that the person needed a break for a bit. Still though, an apology does go a long way towards increased acceptance.

Imagine the person returns and says “I’m really sorry for earlier… I was just at the end of my rope, needed a minute… I’m ok now. I hope I didn’t disturb the party.” Everyone would be more than accepting… in fact, if anyone there was struggling with accepting such a scene, they’d now be far more apt to accept it now and in the future should it happen again.

There really should be no limits to acceptance, in a perfect world but really, there are.

This is humanity we’re talking about… autism or not. We all talk before we think, we all get offended sometimes, we all have to say sorry sometimes. And therefore, there are some limits placed on acceptance.

Just like respect, I can respect a person that I disagree with… even one that says or does something that I find to be in poor taste. I still respect them. I still accept them. I just don’t agree with what they said or did. That’s a limitation of my acceptance. Can a person be fully accepting and yet not accepting in certain situations at the same time?

Speaking of respect, it goes both ways. In the earlier example, person A is inadvertently rude to person B… and person B has to just accept it, without an apology? Let’s flip it around. If person B is offended and would like an apology… if there is to be mutual respect and acceptance, isn’t it now up to person A to be accepting?

In this case, acceptance is broken. 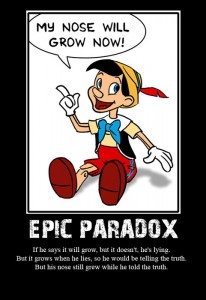 If my children grow up to become bullies, I hope and pray that someone knocks them on their butt and shows them just how wrong it is.

I accept my children for who they are and I know they will do great things with their life. One has autism, one does not. I don’t care, it doesn’t matter. They’re both awesome. And I will do everything in my power to ensure that they know they’re awesome and never let what anyone says ever take that away.

But if either of them is ever lacking in manners, they’ll hear about it.

Because that, I won’t accept.

11 Responses to This is the problem with acceptance