This is how my son shows compassion in an Autistic way

When Cameron was 1, we took him to McDonalds because that’s just what parents do… children love that place, right? Well, it proved to be a complete fail. We didn’t even know he had Autism then but he knew it… he refused to eat anything they had and refused to join in with the other children in the Play Place. He enjoyed watching the other children play but didn’t really get in there.

We didn’t take him back for a long time after that… until his younger brother was old enough.

Fast forward a few years, Cameron is now 5 and his little brother (Tyler) is 3 and we felt it would be a good time to give it another try. Suffice to say, this time it went far better. We brought food for Cameron, Tyler will eat just about anything there. And they both played in the Play Place. They had a blast!

Yesterday we went again and while they played, I noticed a boy back inside the restaurant with his mom… his name is Jack. He was in Cameron’s class last year but not this year. He was also the one boy that Cameron identified with most last year.

Jack is almost double Cameron’s age, and quite a bright child but also what you would consider lower functioning. I was unsure whether or not they’d even allow it but I went back into the restaurant to say hi and mention that Cameron would love it if Jack would come play with him in the Play Place.

They got up and came in with us… Cameron was so very happy to see him. But they were so awkward looking… like they didn’t even know how to say hi to each other.

It was very obvious that the loud, echo filled, brightly coloured, children filled room was too much for Jack as he paced back and forth on his tip toes and flapping his arms… his mother was not concerned. I asked if he’s ok as he passed by, he said yes and kept going…

What impressed me most was that Cameron stopped going into the slides to play… he stayed with Jack. He didn’t talk to Jack, he didn’t pace… he just sort of hung around and waited.

When Jack felt ready, he approached Cameron and together they both when inside and popped out at the bottom of a slide together. Jack went straight back to stimming… Cameron went right back to waiting.

I was so very proud of my boy. He didn’t ask if he was ok, or try to console him, he didn’t even approach him… but he waited.

Again, Jack was ready and off they went and appeared down the slide once again. This time Jack had a great smile on his face as he went back to stimming.

Tyler went with them when they went but he didn’t stick around to wait. He was up and down those slides while Cameron waited. 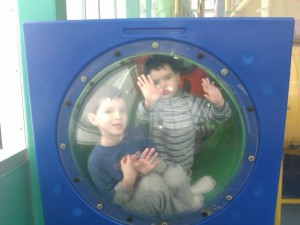 Boys in a bubble

All 3 of them ended up at the end of one of the tunnels at one point, together. I got a picture but all you can see is Jack’s red sweater.

But he was patient and he was there for him. He didn’t leave Jack behind, he didn’t give up on him.

Cameron talked about Jack the rest of the day. He was just so very happy that Jack was there. Even though it meant only going back into the thing 3 times when he could have done so much more… he was just so happy to have a friend with him.

← The follow through. When disciplining, stick to your guns
The simple request my son made that I’ll never forget →