Planting the seeds of independence

Independence, that place where you can have chocolate for breakfast every single day if you want… but that you know you shouldn’t. It sounds simple enough for those of us who just do it but having a child really has a way of putting it all into perspective.

This month, we’re taking the first steps, which seem so very trivial and yet, so huge.

First of all, we’re encouraging them to do some things on their own.. they can both get dressed on their own now, which is a great first step. Now we’re pushing forward with having them brush their own teeth, dry themselves after a bath and little things like that. 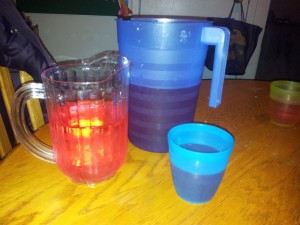 But now, the big one… getting their own juice!

This is a very scary one for one simple reason… one wrong step and it’s sticky, juicy, splash city all over the kitchen!

So what we did was visit the local dollar store and pick up a smaller jug. It has a smaller handle and is smaller over all.

This makes it a lot less heavy and much easier to get their little hands around.

Also, we moved their cups from being up in the cup/glass cupboard to down into the gluten free food cupboard under the counter. This way, they can go and get themselves their little plastic cups any time they want.

The pouring is still a pretty scary task but it is now so much more manageable for them and they feel so proud each time. Often, when they ask for juice and I give them the go ahead, one of them will rush off to pour glasses of juice for both of them because they’re so eager to be such big boys.

It’s also worth noting that Cameron is 6.5 years old while Tyler just turned 4…. and while Cameron is doing grade 2 school work while he’s only in grade 1… when it comes to the motor skills required to pour juice, because of how autism affects him, they’re actually pretty even skilled.

In a way, I kind of feel bad that he’s learning the things his little brother learns at the same time, when it comes to tasks such as this but at the same time, I do like that they get to learn them together and gain an even closer bond that comes with the success of independence. 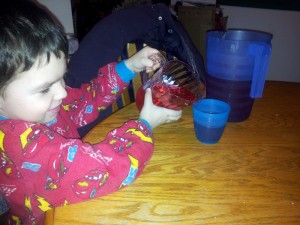 2 Responses to Planting the seeds of independence