No one knows your child better than you do, not even Santa!

Usually in the world of Autism, this refers to teachers, therapists and doctors but the truth is, it can apply to anyone… this year, it was even proven to be true of Santa! 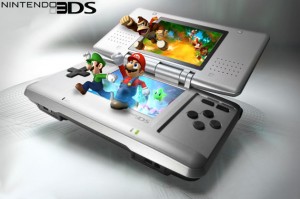 So back in July, Cameron told us that he wanted a Nintendo 3DS, and reminded us of that fact every week for the next several weeks. He even knew which games he wanted.

Then in October, Cameron’s friends at school got him hooked on Bey Blades… a spinning top kind of battle game. He loves them. His requests for the 3DS died down… he still wanted one, but he didn’t talk about it anymore.

If you’ve followed my blog, you know that Cameron is a video game boy, through and through. He loves his video games more than anything and they love him too. He’s developed some great motor skills, reflexes, problem solving skills and more.. all due to his video games.

To give you an example, Tyler (his little brother) got the new Sonic Generations video game on December 4th (for his birthday)… so Cameron got to play but played it in much more limited portions than normal. Since it wasn’t his game, he didn’t get much play time at all. Maybe an hour a day, some days no playing at all.

And yet, he finished that game less than 2 weeks later. Less than 14 days and he had beat the boss and won the game. That’s pretty good for anybody, much less a six year old with Autism.

Anyway, back to the 3DS… my wife and I decided to get him the 3DS from us, since it’s what we know he really wants and we left the Bey Blades to Santa… who was very generous. He got 7 of them in total and a stadium to have them battle in!

And the winner is…

Christmas morning came and went, wrapping paper everywhere and more boxes than our recycling bin can handle… and 2 days later, he’s just now starting to open his Bey Blade packages to try them.

What has he been doing all this time? Playing with his Nintendo 3DS!

Truth be told, the only real reason that he even played with his Bey Blades this morning is because we don’t let him play video games in the morning.

Things will change though, once he goes back to school and his friends are playing with their Bey Blades… and he can’t take his video games with him.

← A holiday message from an Autism Father
Why don’t you celebrate New Years Eve? →

One Response to No one knows your child better than you do, not even Santa!