My entire life is dedicated to helping autistics to feel safe, empowered and free to be themselves. To that end, I’m always reading and researching and looking for the newest programs and tools that can help. I am autistic as is my oldest son Cameron so this is near and dear to my heart.

Recently Colgate reached out to me, asking if I’d be interested in taking a look at something new that they’re involved in.

Colgate partnered with MagnusCards™, an innovative mobile app that empowers people living with cognitive special needs, such as autism, to independently manage daily skills such as tooth brushing.

What is the MagnusCards™ app?

This is how their website describes it: “MagnusCards are digital how-to guides for everyday living.” That’s an oversimplification. This app is really a visual and audio, step by step guide on how to do virtually any routine task from household chores, travel and personal care such as brushing your teeth. There are currently 12 categories such as food, safety and more, each contains decks of cards. Each card being an individual step in completing the routine.

But the app goes even further.

MagnusCards™ offers rewards for completing those tasks and then ranks you in comparison to others that use the app. The more you use the app, the higher you rank.

The biggest feature though, in my opinion, is that there are pre-made decks that you can download to get started with, such as several decks from Colgate. There is in fact more pre-made decks now than there was when I first downloaded the app a week ago, so I’m sure there will be even more added as time goes on.

There is also the ability to create your own decks, including pictures and audio. This means that there’s virtually no limit to the ways in which you can use this app. 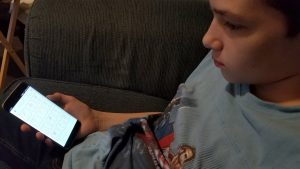 Checking out MagnusCards for the first time

Cameron (my son, 12 years old with autism) and I looked through the app a little bit together. We looked through some of the preset tasks and headed into the Care section. We hit the “Download More Cards” button and found all of the decks from Colgate. Cameron looked at me said “aww… do I have to do this?” Kids! Am I right?

He got the “Colgate – Brushing Your Teeth” and “Colgate – Using Mouthwash” decks and looked through them a bit with me on the couch. I said “Want to give them a try?” and he said “Ok.” 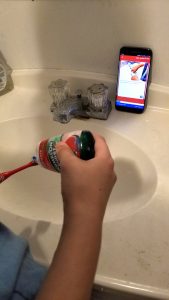 My son went into the bathroom, set the phone up against the back of the sink, under our dirty mirror, loaded up the Colgate – Brushing Your Teeth deck and followed the cards. It was so simple. It was as if he had done it a thousand times before.

You know what?? It worked!

I mean, he’s always brushed his teeth when I ask him to but he’s never liked it and more so, would rush through it. I swear some days he’d walk into the bathroom and right back out again claiming he’s done brushing. But using this app, following the cards step by step, he did a thorough job. I’m sure it will go faster over time as he learns the cards but still, he’ll do a much better job than without.

He completed all the steps and pressed on the “I’m Finished All The Steps!” button and was pleasantly surprised to find that he earned points for a task well done.

After Cameron finished brushing his teeth and earning his points, I asked him what his honest opinion of the app was. He sort of shrugged his shoulders, as kids will do, and said “It’s ok, I guess.” Kids! I’m right. I know I’m right.

Pressing further, I asked if he thought this helps him and if he thinks it would help other children. He said that it definitely does make him brush better. Having the cards to follow really made him do a better job than when he does it on his own.

I’m in total agreement with him. 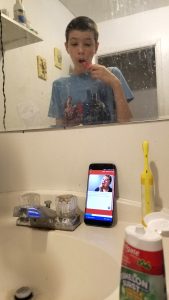 He did have one concern though. He said “I don’t know if it’ll help kids know when to brush.”

Yes, in my house I have alarms set up on our phones that tell us when to do certain tasks and that includes brushing our teeth. I give him full points for this and if there was one feature that I’d like to see in this app that isn’t there, it’s a reminder setting. Perhaps even if just one of the default tasks was exactly that… helping you to setup reminders to do daily tasks. That would be enough.

Aside from that though, this app really checks all the boxes. Doing banking, taking the bus, going shopping… all of that stuff is in there with pre-made decks.

The ability to make your own decks is incredible not just for tasks that you can’t find to download but also for that personal touch. Being your child, especially if they are autistic, no one would know how to explain things to them better than you.

I’ll be honest, I’ve seen other apps that do help autistic children with communication, and routines and more. In comparison, MagnusCards™, on the surface, seems quite simplistic, like there’s not really a lot to it. The more that Cameron and I used it though, the more that started to feel like an advantage rather than a disadvantage. This app does exactly what it sets out to do and it does it with surprising versatility when you really break it down. Being able to create your own decks quickly and easily is a very powerful tool. Having pre-made decks from some very big sources like Colgate is also a huge factor. None of those other apps I’ve reviewed have that.

The best part though is that it’s free. The decks are free. It’s a really tiny app. Takes up no space, uses practically zero battery power. And it’s very easy to use. So let’s say you do go ahead and try it and it doesn’t work for your family (and let’s face it, no one thing works for every single family), then you uninstall and try something else. Right? There’s no reason to not try it unless you already have a system that is working in which case, I don’t think anyone would fault you for sticking with it.

Colgate is sponsoring me on this and I have promised to share some of that with Cameron as he helped me review it. Regardless of that, I absolutely would and will recommend MagnusCards™ to people I know. I really think people should at least give it a try. Watching Cameron use it a few times now, I have to say that for as simple as it is, it works.

Check out the Colgate MagnusCards™ at http://colgate.magnuscards.com and let me know what you think! 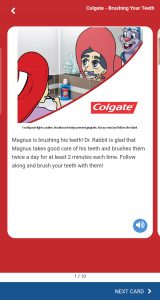